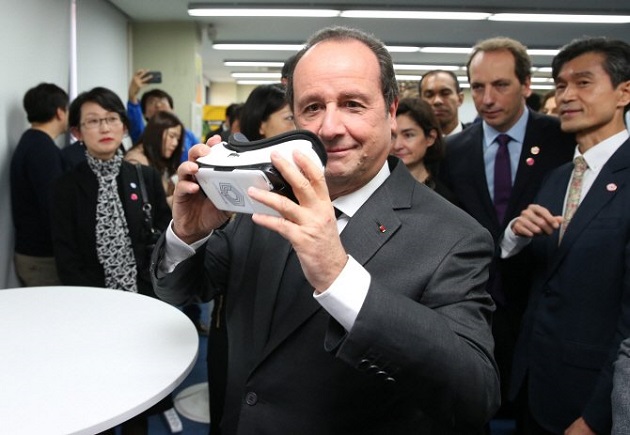 French President Francois Hollande is currently is Seoul, South Korea to meet President Park Geun-hye to discuss several issues including bilateral relations, climate change and also North Korea. It’s the Presidents first trip to South Korea since he took office in 2012, and the first by a French leader for 15 years. To help better strengthen cooperation between the two countries the leader has been shown some of the latest technology being developed. InnerspaceVR, a French software studio revealed on Twitter the President had been shown some of its virtual reality (VR) work whilst he was there.

InnerspaceVR didn’t divulge which of its projects President Hollande saw but by the his expression he enjoyed the VR experience shown on a Samsung Gear VR head-mounted display (HMD).

The developers VR projects include D.M.Z: Memories of a no man’s land, a 20 minute documentary experience which takes viewers to an area of the world that is strictly forbidden for anyone to enter apart from the military personnel who work inside it. Narrative experience The Fifth Sleep which transports players into the brain of a patient in a coma or Playhead a musical VR videogame.

VRFocus will continue to follow the latest project details from InnerspaceVR as they’re announced.