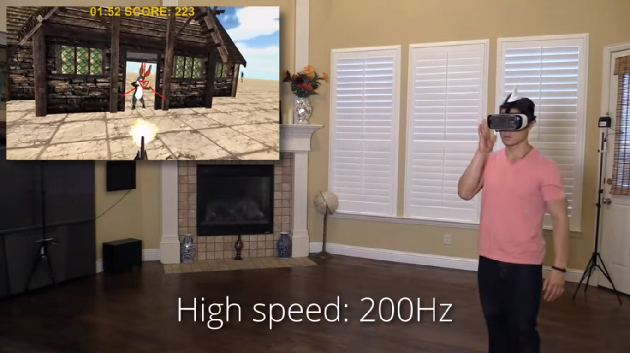 Head-mounted displays (HMDs) like the HTC Vive and Sony Computer Entertainments (SCE) PlayStation VR for PlayStation 4 have motion-tracking as standard (via different methods) to give a fully immersive virtual reality (VR) experience. While mobile headsets like Google Cardboard or Gear VR don’t have this, they merely have head-tracking provided by the smartphones gyroscope. Thus sitting up, crouching or walking isn’t mirrored inside the virtual world. Now IndoTraq LLC a Dallas, Texas-based firm has created a wireless tracking system to achieve this.

IndoTraq LLC announced its new system at the Consumer Electronic Show (CES) 2016 last week, with a demonstration model available on the show floor (which VRFocus got its hands-on). It’s comprised of a HMD mounted sensor with a further three mounted around the user. IndoTraq can then track a user indoors up to a distance of 100m, even working through walls. Designed for indoors the system can also be used outdoors if required with an extended range up to 300m.

The company claims the technology has extremely accurate positioning down to <5mm. Other specfications include a refresh rate of 200Hz and a minimum latency of 5ms. This should give a very smooth, consistent VR experience for anyone using the kit.

While IndoTraq LLC has lauded the VR and augmented reality (VR) applications at CES 2016, due to VRs dominant showing at the event there’re other avenues the company is working towards. These include, autonomous robots/drones, healthcare, analytics, connected home, wearables and athlete tracking to name a few.

A developers kit for IndoTraq will be launched in March 2016, but no prices have yet been released. VRFocus will continue to follow the progress of IndoTraq as further announcements are made.