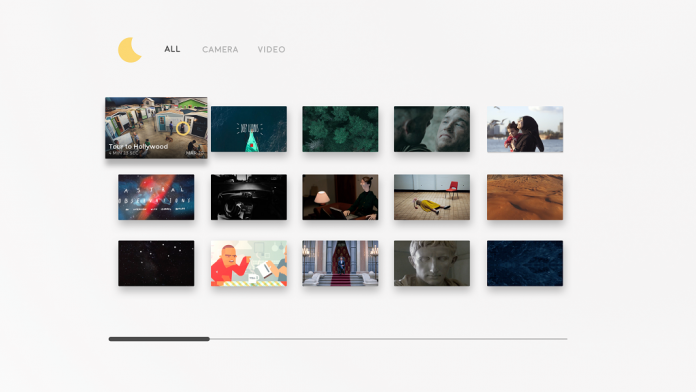 So far this week the Samsung Gear VR head-mounted display (HMD) has seen acrobatic videogame SwingStar VR by Computer Lunch arrive, and the Guardian VR app with its first virtual reality (VR) experience 6×9. And another app has just landed for those who enjoy standard videos as well as 360-degree ones in VR. The app is called Moon Player and its made by Rock VR.

With Moon Player users can watch high-quality videos on their headset that are stored on their smartphones. So whether you’ve recorded someone’s birthday, filmed a concert, or downloaded your favourite TV series, Moon Player should play it as most formats are compatible.

The app has a very straight forward layout. The main menu gives you three options, All, Camera or Video. It’ll automatically start on all, bringing up thumbnails of the videos you have on your device. Selecting one will enlarge it to a massive size inside a completely black area. Clicking on the video again will bring up further options, such as pause, skip to next video or skip back, 3D and panorama. With panorama Moon Player stretches a standard video all the way around you, to give it a 360-degree effect, while 3D splits the video in two.

Moon Player is available to download from the Oculus Store for free now, and VRFocus will continue to bring you the latest releases on the mobile HMD.