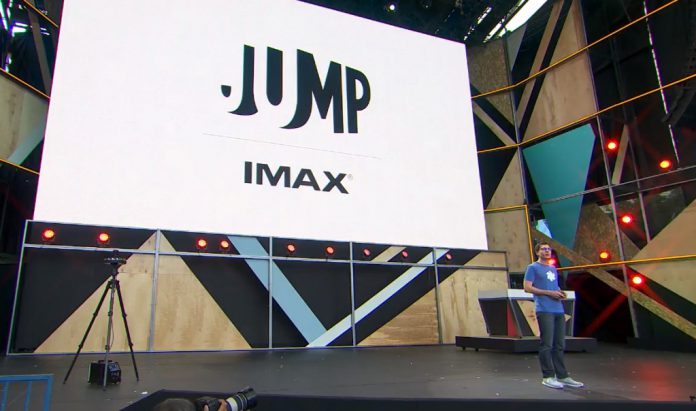 At Google I/O, Mountain View, last week, Google and IMAX Corporation announced at that the two companies are now working to develop the cinema-grade virtual reality (VR) camera – the IMAX VR camera – as part of Google’s JUMP programme. In an effort to enable leading filmmakers and content creators to deliver the highest-quality 3D 360-degree content experiences to audiences worldwide, IMAX’s team of engineers and camera specialists will work with Google to design the new high-resolution cameras from the ground up.

In accordance with the agreement of the partnership, a new and unique camera will be built to utilise JUMP, Google’s platform for creating and viewing stereoscopic 3D 360 degree video. Few details have been made available about the specifications of this camera at present.

“For nearly 50 years, IMAX has pioneered moving image capture to allow filmmakers to produce the highest resolution images across 2D, 3D, film and digital formats, said IMAX Corp. CEO, Richard L. Gelfond. “[This] partnership with Google takes us into the next frontier of immersive experiences – virtual reality – and we look forward to working with them to provide our filmmaker partners and other content creators with a level of VR capture quality not yet seen in this space. VR marks an exciting area of opportunity for IMAX and we believe this agreement, which enables us to participate in image capture and content creation, is an important first step in our broader VR strategy.”

IMAX developed its first 2D 15perf/65mm film camera in 1976. Since then, IMAX has built out a suite of high-end capture devices, including recent developments of a lightweight 3D digital camera as well as a new 2D digital camera developed in partnership with ARRI.

“IMAX is known everywhere for their incredible immersive cinematography and sound, and we’re delighted to have them contribute their decades of experience in cameras and content to the JUMP platform,” said Clay Bavor, VP, Virtual Reality at Google.

IMAX will also provide Google with exclusive access to pre-existing IMAX documentary content for conversion and use with Google’s VR technology, it has been confirmed. VRFocus will keep you updated with the latest details on this partnership, and it’s progression towards the eventual release of the IMAX’s new camera.