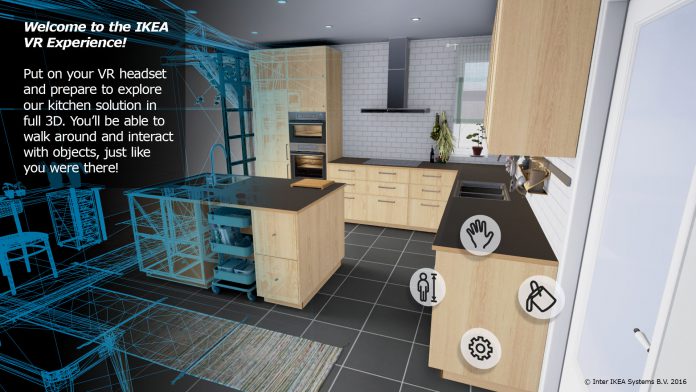 There are a huge amount for virtual reality (VR) videogames releasing for the HTC Vive head-mounted display (HMD) as the anticipated kit finally begins to arrive for the first pre-order customers today. Owners are quite simply spoilt for choice when it comes to looking for things to play. One more of the more unusual additions to that line-up has arrived at the last minute, however. Furniture retailing giant IKEA has launched its very own Room-Scale app which can now be downloaded entirely for free.

The app is designed as an experiment for now, though still boasts from unique features. Players are able to explore an IKEA kitchen by actually walking around it and utilising a teleport mechanic when necessary. This isn’t a static piece, however, as you can change the look of the room as you go and even use the HTC Vive’s position tracked controllers to pick up frying pans, open cupboards and even dispose of vegetable skins. It’s also possible to alter your height in VR to give you an idea of how accessible the room would be for others.

IKEA is only planning to support the app until August 2016. Until that time it’s looking for feedback on its creation, asking users to write in to the email address vrdevelopment@ikea.com.

Check back with VRFocus for the latest updates on the HTC Vive.