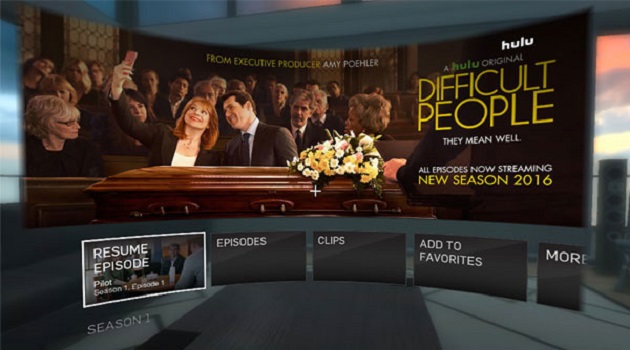 When the Gear VR mobile-based virtual reality (VR) head-mounted display (HMD) hit last year, it already included an app to let users watch Netflix content in VR. At the time, it was known that an app for another popular streaming service, Hulu, was also on the way. The app hasn’t launched in full just yet, but has today released in Beta form on the platform, and is now available to download for free.

Like the Netflix app, Hulu’s VR offering sits users in a cosy living space in front of a giant TV screen on which they’ll watch their content. Unlike Netflix, however, Hulu’s app features some premium 360 degree content to view. The VR environment is also interactive in a few ways, hiding some easter eggs for users to discover. You can even change these spaces to find one right for you. Of course, you’ll need a Hulu subscription to actually be able to view this content.

The Hulu app joins Gear VR’s growing suite of video services, including Oculus VR’s own offering, which features movies to purchase and watch in virtual areas.

Check back with VRFocus for more on Hulu’s VR support.