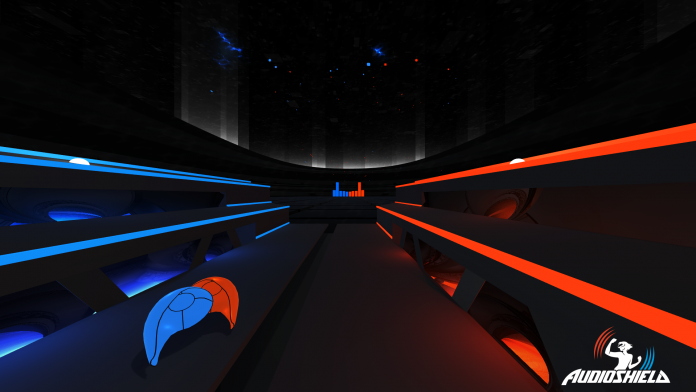 The Steam VR Developer Showcase is taking place in Seattle, Washington today and sees a number of studios gather to display new content for the kit. Many of these teams are showing off titles that have already been announced, though there are a handful of brand new experiences. Among these is Audioshield, which remains shrouded in mystery. However, a first look at the title has now been revealed in the form of a new screenshot, which can be seen below. The videogame’s developer has also been revealed.

Audioshield is being created by Dylan Fitterer, the developer of the Audiosurf series. Fans may remember that Audiosurf 2 recently showed up on Steam listings that suggested it might be getting HTC Vive support. It’s not clear if this is still the case or if Audioshield is only VR project that Fitterer is working on right now.

Meanwhile, the image above consists of a corridor that leads up to a large circular room. The room is split in half, highlighted with orange on one side and blue on the other. Two blue and orange items also rest on the floor to one side. Each looks almost like a scoop of sorts, but it remains unclear as to what their use is and how the title will play out in general. A logo for the experience can also be seen in the bottom right corner.

Keep reading VRFocus for the latest on Audioshield and all other VR titles at the Steam VR Developer Showcase.