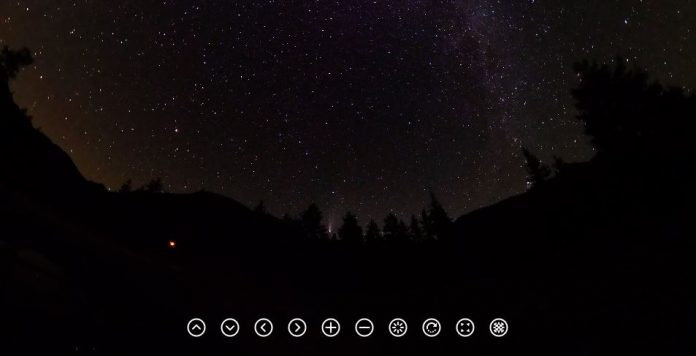 
Yes it is possible to take a 360 photo of Neowise comet, as in this spectacular photo by Danny Najera, which captured the comet beautifully against the Milky Way, below the big dipper:

Here’s how Danny captured the photo.

CAMERA: For this shot, Danny used a Ricoh Theta Z1 ($999, reviewed here).  The Theta Z1 has 1-inch sensors, the largest among any prosumer or consumer camera, and larger than most professional 360 cameras.  With the large sensor, the Theta Z1 has among the best low light sensitivity of any 360 camera.

However, you can capture the night sky even with cameras with smaller sensors such as these night sky photos I shot with Theta S.  The most important thing is to have a camera that has manual exposure and can use a slow shutter speed.

LOCATION: Although many 360 cameras have sufficient sensitivity to capture the night sky, you can’t just crank up the ISO to capture the stars.  The reason is because in urban areas, there is too much light, which tends to outshine the stars and makes them difficult to see.  So you’ll need to take the photo in a very dark area with less light pollution.

EXPOSURE SETTINGS:  For this shot, Danny used an aperture of f/2.1, shutter speed of 30 secs., and ISO 1600.  Please note that Danny shot this in an exceptionally dark area.  If you are near any city, you will likely have to adjust your exposure to a darker one, which will make fewer stars visible, but hopefully the comet will still be visible.

The post How to take a 360 photo of comet Neowise (including exposure settings for night sky photos) appeared first on 360 Rumors.