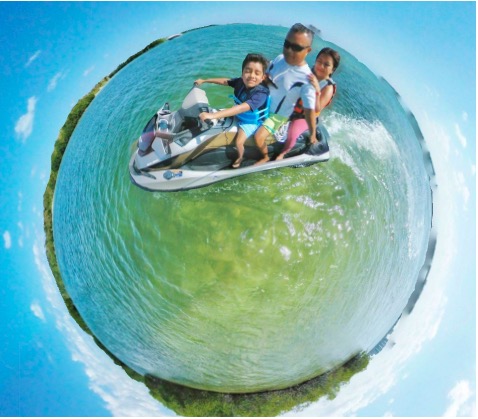 
Now, anyone — even Android users — can post Facebook 3D photos, thanks to a new technique by Pepe Vazquez (360 Tips & Tricks).  Pepe found a way to post a Facebook 3D photo without having a dual lens iPhone.  Here is a link to a sample 3D photo.

Here is a summary:

Step 1: create a copy of the target photo and paint a depth map over it.  Objects painted white will be near, while objects painted black will be far away, and you have all the shades of gray in between.

Step 2: rename the depth map with the same name as the original but add “_depth”.

Step 4: create a post with both the target photo and the depth map you created.  Facebook will interpret this as a 3D photo.

If you want to create a depth map automatically, you can do it with a Kandao Qoocam.  Just take a 3D 180 photo and open it in Qoocam Studio desktop app.  Choose “perspective” (rectilinear) projection, and in the rendering screen, choose Mono instead of Stereo, then check the box for “Output with depth.”  The program will output both a 2D photo and a depth map.  The depth map will be in PNG format, so you’ll have to save it as JPG and rename the file to the same name as the 2D photo with “_depth” added to the filename.  Then upload both files in a Facebook post.