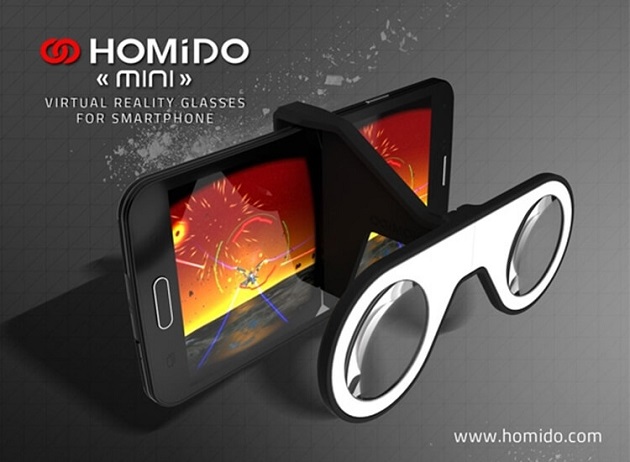 With expectations high for the arrival of virtual reality (VR) headsets Oculus Rift, HTC Vive and PlayStation VR, its been the mobile head-mounted displays (HMDs) that have garnered the first mass market appeal. With the launch of the inexpensive  Google Cardboard and then the slightly pricier Samsung Gear VR in 2015, consumers have been able to get their first taste of the immersive technology. But although these devices and others are for smartphones, their bulky design means portability is poor, so a new wave of pocket friendly designs are coming to the market. One of the first is the Homido Mini.

Available now from retailers including Amazon.com for $14.99 USD, the Homido Mini takes a different approach to boxy VR headsets with a glasses style design. With foldable eye pieces attached to a clip, the unit fits over a smartphone giving users the opportunity to view 360-videos and VR experiences whilst out and about.

The Homido Mini comes at a time when other firms have also seen the benefits of bringing out portable units giving users a variety of options when choosing what suits them. French start-up VRV Prod has created POCKEYES a headset very similar to Google Cardboard but it’s completely foldable. While Figment VR launched and successfully completed a Kickstarter crowd-funding campaign last year, that sees a very similar VR glasses design to Homido Mini but built into a smartphone case for the iPhone 6, iPhone 6 Plus, iPhone 6s and iPhone 6s Plus.

This area of the industry is going to develop and grow as manufacturers invent more innovative solutions to the problem of mobile VR, and VRFocus will continue to follow and report on those advances.