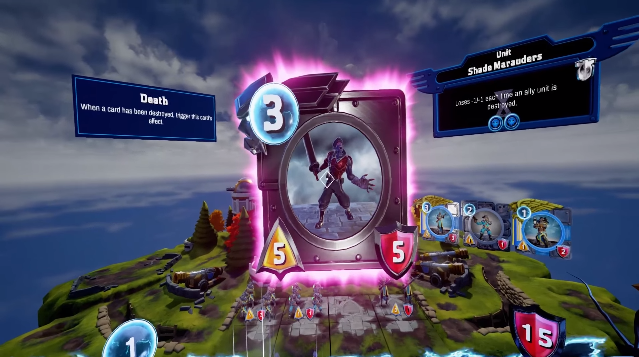 Yesterday VRFocus reported that Oculus VR figureheads were teasing an upcoming announcement of a brand new virtual reality (VR) title for the Oculus Rift head-mounted display (HMD) made under the Oculus Studios banner. Palmer Luckey himself suggested that the experience might be some sort of card battling title with a reference to popular anime series, Yu-Gi-Oh!. Now that title has been revealed as Dragon Front, a colourful new project from The Conduit developer High Voltage Software. The first trailer for the videogame can currently be seen below.

Dragon Front is indeed a fantasy strategic card game that appears to take after other popular games like Magic: The Gathering. In it, the player creates a deck of 30 cards and then heads into battle on a 4 x 4 grid in both single and multiplayer matches. Over 250 cards feature that appear in front of the player as 3D images of the unit they represent and then come to life on the battlefield. There are reportedly four factions to choose from, and Champion units also feature to help players claim victory. Overall, the title features 280 characters, 80 different encampments, and more than 100 spells

This is actually High Voltage Software’s second VR title to date, with work still continuing on its upcoming first-person shooter (FPS), Damaged Core. The developer had even recently teased that it was working on a second ‘big’ title for the Oculus Rift. It’s thought that the studio’s first title will be a launch title for the Oculus Rift when it begins to ship on 28th March 2016, but Dragon Front will still be launching in the first half of the year, with three add-on packs in the works to release later down the line.

Stay tuned to VRFocus for the latest on Dragon Front.