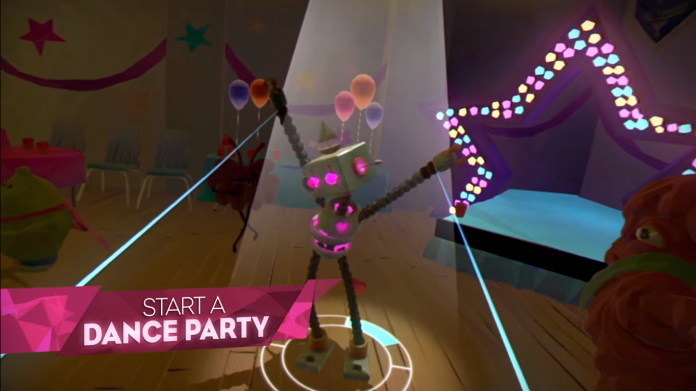 Harmonix Music VR has previously released a trailer for the Electronic Entertainment Expo showing four different worlds that players can delve into whilst listening to music, and now Harmonix Music Systems has given more insight into one of the more interactive worlds of the four: The Dance.

In a post outlining the newest official reveal of the music visualisation application, it is explained that the new world is a little different compared to the other three: “The Dance lets you choreograph dance moves for a cast of wacky characters. Once the party is going, the DJ booth has a handful of toys for you to play with, and Giant Mode lets you wreak havoc on the dance floor.”

In the E3 trailer for the videogame The Dance is shown, as well as the other three worlds: The Beach, the more classic world that has come from the Gear VR version where the player relaxes on the beach and can interact with various objects on the tropical island; The Easel, where the player can create artistic interpretations of the music they are listening to using lines and shapes that pulsate in various ways; and one other world that hasn’t been officially announced.

Users can either listen to the music that comes along with the videogame, including tunes from cult classic beatmatch rythm game Amplitude, A City Sleeps, and a few home grown gems from Harmonix’s M-Cue, and there is also the choice to use your own music.

Harmonix Music VR is to launch alongside the PlayStation VR on the 13th October on the console head-mounted display (HMD).

Keep an eye out for more information on Harmonix Music VR as well as a video interview from E3 on the app. Also, for all the latest news and updates in the world of VR, make sure to check back with VRFocus.