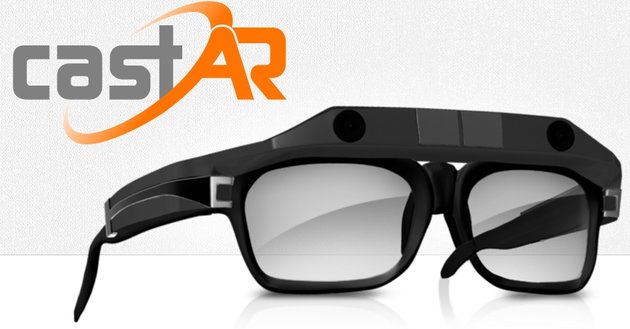 It’s important to understand the context of castAR before you make any judgments about it. Coverage at VRFocus is usually concerned with devices that we all know are going to cost a fair amount of money from the $350+ USD Oculus Rift to – for the more extreme – the $3,000 developer edition of the HoloLens. That’s not what castAR is; it’s not a device that will be mainly aimed at enthusiasts for its first few years but instead something that hopes to be affordable and accessible right from the word go. Granted it’s not clear exactly how much the kit will eventually retail for, but if creator Technical Illusions stays true to its low cost promises, it could have a remarkable piece of technology on its hands.

castAR consists of a pair of glasses and a foam mat. Said mat acts as a sort of window into other worlds when viewed through the extremely light (130g) glasses, displaying virtual images that the player can get different views of by walking around the material itself.

That could mean many things for videogames and other experiences. On first thought, it’s easy to see the system replacing the physical board game with the digital one, or perhaps showcasing a 3D rendered model to others. Its creators are also eager to point out it doesn’t have be to laid out on a table, perhaps instead hanging from a wall or ceiling. For the purposes of this recent demonstration, however, it meant a marble run-like videogame, a game of Battleship and a top-down shooter experience.

The first two of these both demonstrated castAR’s unique multiplayer potential, as each player can essentially have their own screen when looking at the mat. With Battleship, for example, each player sees their own board with the opponent’s hidden. It’s similar to the split-screen concept that Sony Computer Entertainment (SCE) demonstrated with its PlayStation-branded 3D TV a few years ago, only far more open. In fact it’s even possible to use a mirror to reflect the surface of the mat and see even further into the given world. For a piece of kit that’s aiming for a mainstream market, castAR is impressively robust in this regard.

Crucially, this is an inherently social device. Human interaction doesn’t change when two players use castAR, because you can see the real world as clearly as the virtual one. And with the glasses so easy to slip on and off and without the need to adjust any kind of tracking or clear out space for any kind of sensors, castVR is certainly a convenient piece of kit.

The videogames and demos themselves were unspectacular; this demo was much more about how they were played rather than what was being played. The top-down shooter was about as traditional as the genre gets, but was enriched by this form factor. It’s certainly not as immersive an engaging as stepping into that world for yourself with a true VR HMD would be, and it doesn’t quite bring the world to life like HoloLens might but castAR’s mission is to make a product that others can enjoy while that more complex tech remains behind so many barriers. It’s an intriguing trade-off and one that could well pay off from Technical Illusions.

There are some concerns, however. castAR’s key advantage is the window it has over the likes of the Oculus Rift and other HMDs becoming affordable and accessible. That window has already started narrowing, and we know that the consumer product won’t be available until 2017. There’s no telling what state the Oculus Rift will be in by then, or the year after and the $99 mobile-based Gear VR is arguably about to start eating into the same market castAR hopes to capture. It certainly seems like the sooner that the device gets here, the better its chances of success, but we’ll have to keep sitting tight for now.

What’s most admirable about castAR is its ambition to bring some form of AR/VR tech to the masses in the next few years while the better-known solutions focusing on their own streamlining. In an interview with VRFocus that will be posted up later in the week castAR CEO David Henkel-Wallace made numerous references to a grandmother picking up the kit for her grandchildren for Christmas. Releasing and marketing a tech product to that audience successfully is a huge challenge, but castAR seems much closer to it right now than the Oculus Rift or HTC Vive. It’s just a case of if it can capitalize on that while it counts.

The post Hands-on with castAR appeared first on VRFocus.