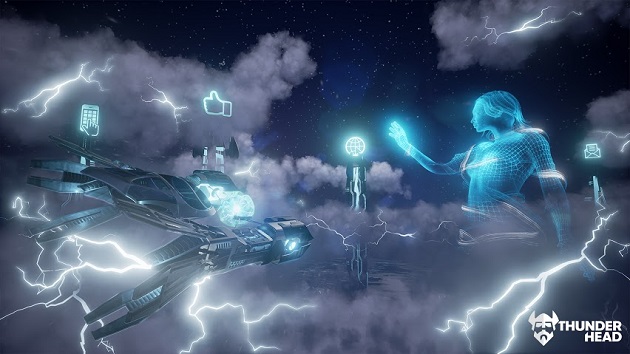 Virtual reality (VR) and immersive content studio, Hammerhead VR whose previous projects include a rollercoaster ride for French cream cheese company Boursin, and The Genome Browser, has revealed its latest VR experience. The studio was appointed by AMV BBDO to conceive and produce a VR experience for AMVs client, Thunderhead, the cloud-based customer engagement platform.

Above the Clouds puts the viewer at the helm of Thunderhead’s ship in a futuristic Norse world. The viewer flies through clouds and is taken on a metaphorical journey learning about the benefits of Thunderhead’s technology.

Completed in just six weeks, Simon Windsor, Director, Hammerhead VR, said in a statement: “Thunderhead had a bold creative campaign, which we had immense fun with. We introduced a number of new techniques to bring the idea to life, and the result is a VR experience that provides a great example of how brand marketing and immersive storytelling come together.”

While AMV BBDO Chief Creative Officer and Chairman, Paul Brazier commented “This VR experience had very real challenges to create a clear understanding of Thunderhead’s technology in a visually arresting way, and in a short amount of time. Hammerhead VR impressed me with their creative flare, speed, and quality of production. I couldn’t have wished for a better partner to produce this.”

The experience launched at the Festival of Marketing held in London, UK last week and is available to view on Littlstar.com, and via YouTube. Anyone using the YouTube app can use a Google Cardboard or similar headset to view the video. It will also be releasing on Oculus Share soon.

VRFocus will continue to bring you all the latest news on Hammerhead VR’s projects as they’re announced.