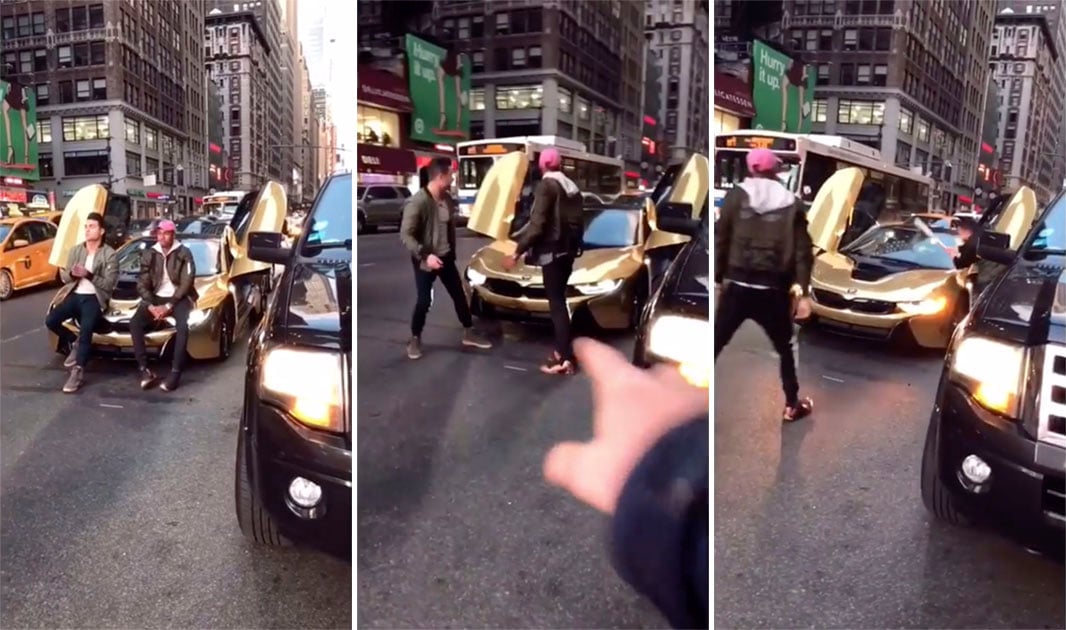 21-year-old Coby Persin describes himself as a “social experimenter/pranksters of ‘That guy from YouTube’”. But when he stopped his fancy gold BMW i8 on a busy Manhattan street for a “quick photoshoot,” he bit off a bit more than his BMW windshield could chew.

You can see the whole incident in the video below. As Persin and one of his friends hang out on the hood of his car, blocking traffic and getting the honks and curse words to prove it, one angry driver decides he’s had enough. He pulls up behind Persin’s car, grabs a bat out of his trunk, and applies it (with gusto) to Persin’s windshield.

We’ll forgive you if, while watching this, you feel no sympathy for Persin:

The video, which has received 3.3 million views as of this writing, was posted as a plea for help—Persin is hoping someone can identify the guy so they can arrest him. He’s even offering a $1,000 reward for any info that leads to an arrest. However, the video hasn’t exactly gotten the response Persin was he for.

Instead, the comments on the post range from snarky to downright threatening. Most people seem to view the bat wielding stranger as some sort of hero/vigilante.

Here are just a few of the most liked comments, edited for language:

There is a lesson to be learned here: don’t block traffic on a busy New York City street without a permit… and maybe some police protection.

Speaking from experience, New Yorkers are used to blocked lanes and other traffic annoyances, to the point where they won’t even honk if it’s an official situation (construction, police barricade, etc.). But if you add further inconvenience for a “quick photoshoot” on your fancy car, you can expect this exact reaction … or worse.