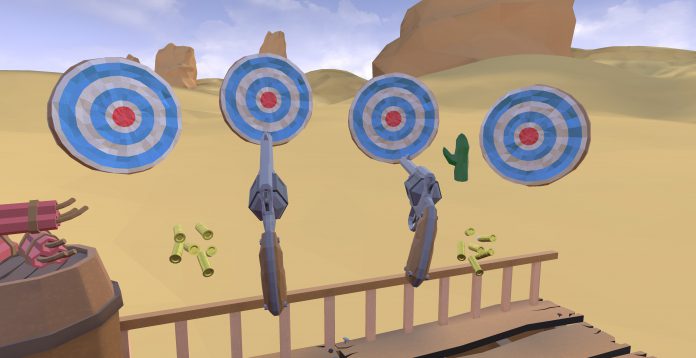 When you get either the HTC Vive or Oculus Touch controllers in your hand, there’s one thing you almost immediately want to try as a videogame fanatic; shooting a gun. There are already a handful of experiences for the HTC Vive virtual reality (VR) head-mounted display (HMD) that let you do, and they’ll also come to the Oculus Rift when Oculus Touch launches later this year. Joining the list of titles for both devices this week is Gunslinger Trainer, which is now available in Early Access form.

Created by Marcus Nichols, Gunslinger Trainer is a first-person shooter (FPS) with a Western setting. Players test their skills by taking out targets as quickly and as skilfully as possible. It’s also possible to light sticks of dynamite and throw them as well use knives and axes. The full version of the title, expected to launch anywhere between six months to a year from now, will include more levels with intractable objects and new ways to explore the core mechanics.

Gunslinger Trainer is currently available for £2.99 GBP. The title also supports gamepad input. To play it on Oculus Rift you’ll need to opt in to allow content that isn’t sold through the Oculus Home store.

Check back with VRFocus for the latest releases for the HTC Vive.