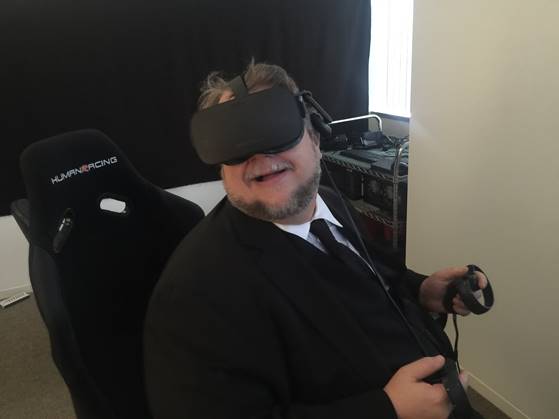 Renowned director Guillermo Del Toro, the man behind Pans Labyrinth, Pacific Rim, Hell Boy and many more, is well known for liking virtual reality (VR). He has worked on a variety of head-mounted displays (HMDs) for projects over the last year, including Google Cardboard for Crimson Peak, Samsung’s Gear VR for The Strain and Oculus Rift for Pacific Rim: Jaeger Pilot. And this interest continues with a recent tweet where he is pictured trying The Martian: VR experience.

The promotional marketing demo (for the film of the same name), saw its release at the recent Consumer Electronic Show (CES) 2016 in Las Vegas. The preview build of The Martian: VR Experience showcased at CES was available on both Oculus Rift with Oculus Touch controllers and the recently revealed HTC Vive-Pre.

Del Toro can be seen trying the experience with the Oculus Rift CV1 and Touch controllers to which he stated on the tweet: “No, I am not high- Just having a blast w the VR experience created for THE MARTIAN at Fox.”

It still unclear if and when the public may get access to The Martian: VR experience, but that may become clearer once the headsets start to become available in the coming months.

VRFocus will continue to bring you the latest updates to The Martian: VR experience as further announcements are made.

The post Guillermo Del Toro has ‘a blast’ on The Martian VR Experience appeared first on VRFocus.