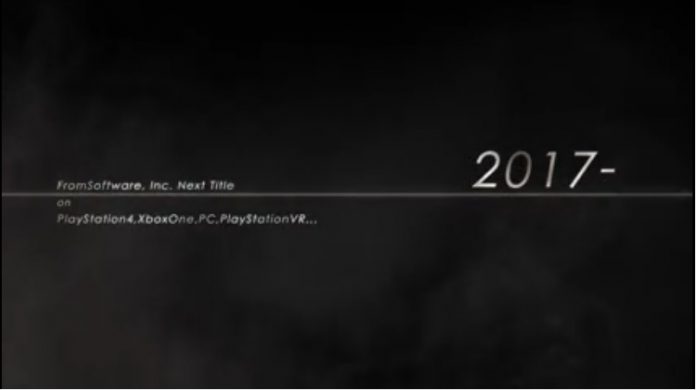 FromSoftware, developers of the hugely popular Dark Souls franchise, was announced to be developing for PlayStation VR at the Game Developers Conference (GDC), San Francisco, earlier this year. No details about their project have yet been revealed, but a leaked video suggests it’s planned for release in 2017.

FromSoftware are most well known for the Dark Souls series and the PlayStation 4 exclusive Bloodborne, however the company’s catalogue of releases includes numerous big name titles. Armored Core, Otagi, Chromehounds and Ninja Blade are all properties also created by FromSoftware, showcasing a wide variety of genres explored by the studio.

A recruitment video currently listed as ‘private’ on FromSoftware’s YouTube channel, discovered by Reddit user 113mac113, displays the above image suggesting that another videogame property is currently in development for PlayStation 4, Xbox One, PC and PlayStation VR. No other details are currently available.

The video has been included below for completion’s sake; however it’s likely to be removed from FromSoftware’s channel very soon. VRFocus will keep you updated with all the latest details on FromSoftware’s work for PlayStation VR.