HTC and Valve will be kicking off 2016 with the release of some 7,000 new developer kits for the HTC Vive virtual reality (VR) head-mounted display (HMD). This will take place ahead of the launch of the consumer version of the device the following April. The new kits are expected to include plenty of updates, possibly resembling the final consumer version along with new editions of the SteamVR controllers that are set to arrive with it. Today, it appears that images of both of the new HTC Vive and its controllers have leaked online.

Reddit users claim to have uncovered two images from HTC’s own website that reveal both the HMD itself and the controllers. The HTC Vive itself looks fairly similar to the original developer edition of the kit (seen in the header image above), with the same markers dotted across the front and a camera placed squarely in the middle. It’s the controllers that seem to be best improved, with a refined form factor and the top plate replaced with a hoop. They also carry the HTC branding and home and menu buttons along with the standard options.

HTC itself hasn’t commented on the validity of these photos just yet, but expect all to be revealed in January, as these kits start reaching developers.

The HTC Vive itself offers Room Scale user tracking with the help of the SteamVR Lighthouse laser-based tracking system, provided by Valve. This allows players to put on the HMD, walk around an area of up to 15 feet by 15 feet and have those movements replicated within the given experience. The controllers, meanwhile, are also position tracked, giving players ‘hand presence’ within VR and allowing them to reach into virtual worlds and interact with items in realistic ways. Pre-orders for the device will be going live in February.

For the latest updates on the HTC Vive, keep reading VRFocus. 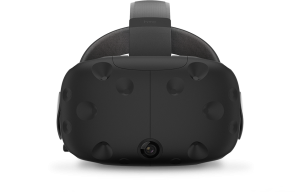