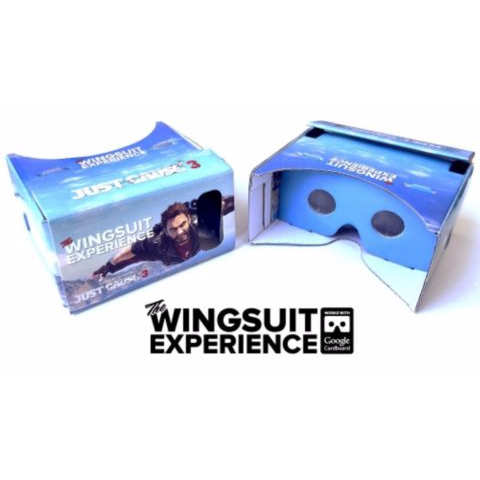 Next month will see Square Enix and Avalanche Studios launch the third entry into the Just Cause sandbox series with Just Cause 3. Recently the pair became some of the first videogame companies to use virtual reality (VR) in marketing as they revealed a new 360 degree smartphone app that gives viewers a panoramic view of some of the title’s over-the-top action. The app is compatible with Google’s DIY mobile head-mounted display (HMD), Google Cardboard, and for those that don’t own one of these kits, Square Enix is providing a chance to get one.

The company has revealed that those that pre-order Just Cause 3 over on Tesco Direct in the UK will receive a free Google Cardboard that features an image of protagonist Rico Rodriguez soaring through the air in a wingsuit on the front. Fans can use the kit to view the Just Cause 3 Wingsuit Experience, as the app is named, following Rico himself as he glides about the title’s island setting, getting into firefights and blowing up structures. Google Cardboard is used to allow viewers to look around the experience as if they were there.

The Google Cardboard set can also be purchased on its own. The offer, meanwhile, is only available while stocks last while the app can be downloaded on both Android and iOS. Just Cause 3 is expected to launch on 1st December 2015 in the UK on PlayStation 4, Xbox One and PC. The title will not feature any native support for any VR HMDs, though Square Enix as a whole is working with the technology. The company recently revealed a demo for its popular massively multiplayer online (MMO) experience, Final Fantasy XIV Online, with PlayStation VR support, and is also porting its popular mobile experience, Hitman GO, to Gear VR.

VRFocus will continue to follow Just Cause 3 closely, reporting back with the latest updates on the title.