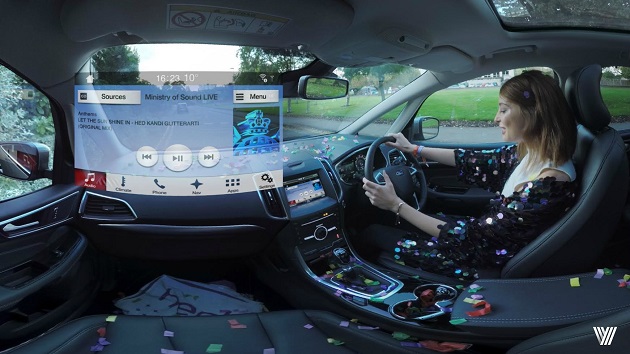 For the MWC 2016, attendees use a Samsung Gear VR and headphones to join 25-year-old university graduate, Jess, as she uses AppLink to relax to music from Ministry of Sound, and is transported to pool parties and club nights while on holiday in Ibiza.

Visualise’s experience features two tracks from the Ministry of Sound’s ‘Chilled’ and ‘Anthems’ channels, Diggin’ On My Groove (Mr. Vasovski Remix) and Let The Sun Shine In (Original Mix) by Hed Kandi Glitterarti and Feel Something feat (Original Mix) by Tommie Cotton.

The experience is designed to encourage developers to create ‘driveable’ apps for Ford SYNC AppLink by showcasing the system’s hands-free capabilities. The system is designed to give drivers hands-free control over smartphone apps using AppLink’s Voice Control functionality, controlling features like the car’s audio system, steering-wheel controls and multi-functional display.

Scott Lyons, Business & Partner Development, Connected Services, Ford Motor Company said in a statement: “The team at Visualise created an impactful video that is both compelling and informative. Our brief was somewhat challenging as we needed to convey a technology story in a fun way using a new experience coming from Ministry of Sound.  The result simply delivers on all fronts.”

VRFocus will continue its coverage of Ford SYNC AppLink presents Ministry of Sound as Visualise continues its promotion.