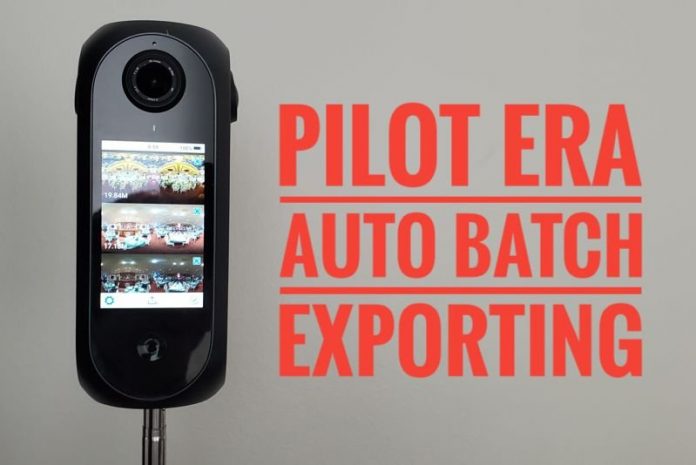 
This professional 360 camera can stitch 8K videos in-camera faster than a PC can stitch 5.7K videos from my consumer cameras.  Pilot Era (reviewed here) can now automatically batch stitch all your photos and videos, and you won’t have to lift a finger.

Pilot Era is a professional 360 camera that records up to 8K 360 videos and stitches them in-camera.  Previously, users had to stitch videos one at a time.  But now Pilot Era has ‘Serial Stitching,’ which automatically stitches videos in-camera.

To get this feature, update the firmware to version 4.6 or above:

1. Go to Settings, connect the Wi-Fi to your local network.
2. Scroll down under Settings go to System Update and select it.  It will check for firmware updates.
3. Tap on Download to download, and after the file is downloaded, tap on Install to install the new firmware.

Using this feature, I was able to automatically stitch all my vacation videos shot on the Pilot Era, in-camera (no PC needed) automatically on my way home.  I was actually able to get stitched videos from the Pilot Era even before I could begin stitching videos from my other cameras such as the Insta360 One X (reviewed here).

Firmware 4.6 added other improvements such as being able to upload stitched videos to Google Drive.

Pilot Era is available for a discount through their Indiegogo crowdfunding campaign.  You’ll be able to get it for $1999, a $600 discount from the $2599 MSRP.  The campaign ends in 3 days.  Thanks for using these links to support 360 Rumors at no additional cost to you so I can do more tests and reviews.