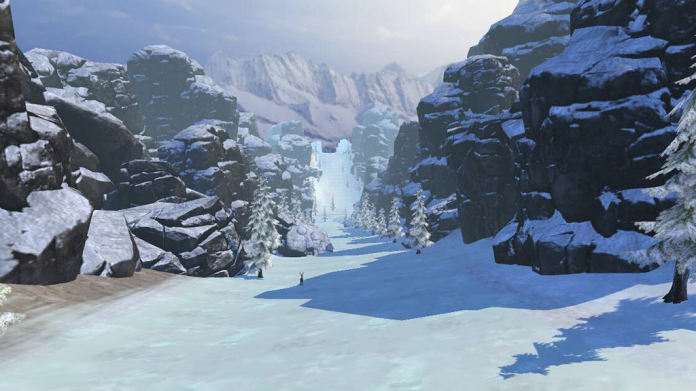 Ever fancy speeding down white snow capped mountains on skis watching the landscape whizz by but don’t fancy all the training or the chance of falling flat on your face, Fancy Skiing VR could be just the thing. Chinese studio HashVR Studio has put the virtual reality (VR) title on Steam Greenlight looking for support from the platforms gaming community.

Supporting the HTC Vive head-mounted display (HMD), a skiing title seems ideally suited to the device’s positional-tracked controllers acting as the poles needed to propel you through the snow.

Built using Unity, the goal in Fancy Skiing VR is to get as far as possible, but just like the real thing its not as easy as just heading in a straight line. There’s a few obstacles to avoid on the way down with trees, boulders, canyons and even deer in the way, simply lean left or right to control your direction.

Best experienced standing up for fully immersive gameplay the studio does advise sitting down to play Fancy Skiing VR if simulator sickness kicks in due to the fast nature of the videogame.

Just like all Steam Greenlight titles HashVR Studio needs to get enough votes to successfully launch the videogame on Steam, either into early access to continue development or fully release Fancy Skiing VR if its ready.

Checkout the first trailer released and see what you think, if it looks good enough then it might be worth a vote. VRFocus will continue its Steam coverage, reporting back with any new Greenlight projects.