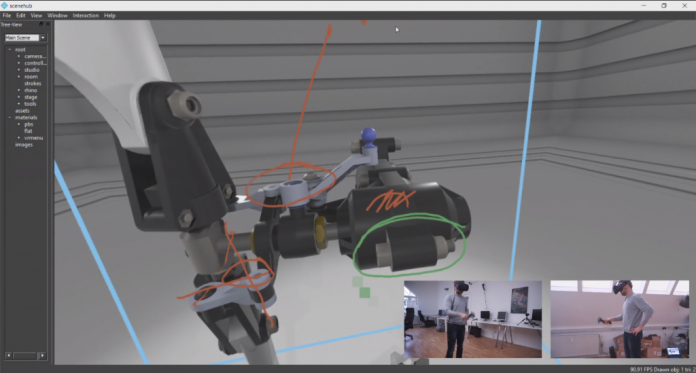 Fabric Software has announced an update to its virtual reality (VR) tools which include integration with freeform modelling package Rhino 3D. The prototype tools, first revealed in November 2015, now allow the extraction, review and optimisation of CAD data in real-time.

The update incorporates a number of new features, including CAD integration, virtual set dressing, markup and annotation, mocap and previsualisation, MIDI for lighting and a virtual camera system utilising a Xsens motion capture suit. A number of videos demonstrating each of these technologies are available via Fabric Engine’s Vimeo channel.

Fabric Software CEO Paul Doyle said: “VR and AR technologies are opening up fantastic new content authoring and review capabilities but it’s clear we are only just scratching the surface of what’s possible. The ability to instantly load, review, edit and save changes to data within VR/AR is a huge leap forward for many 3D industries.”

Fabric Software is calling for alpha testers for the Rhino 3D integration. Those interested can register via the link at http://fabricengine.com/fabric-engine-vr-preview/. VRFocus will keep you updated with all the latest details on Fabric Software’s VR toolset.