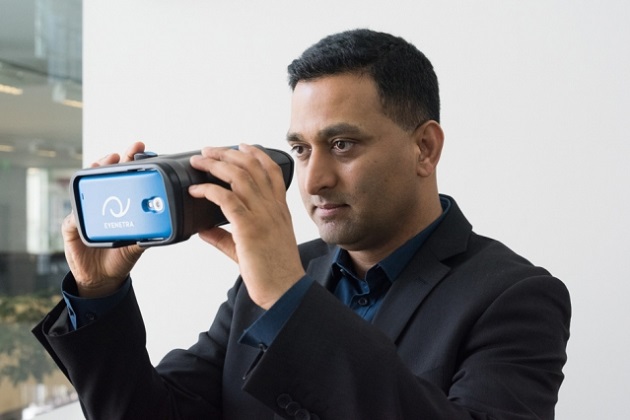 For those that wear eyeglasses, approximately 4 billion globally, the thought of wearing a virtual reality (VR) head-mounted display (HMD) might not be that appealing. HMD manufacturers like Oculus VR, HTC and Sony Computer Entertainment (SCE) have all designed their headsets to enable anyone who wears  glasses to use them in VR. But EyeNetra, is a company that thinks its self diagnostic eye test technology could be combined with VR HMDs, to create customised VR prescription screens.

MIT spinout EyeNetra has invested five years of development and about 40,000 tests worldwide to create its smartphone-powered eye-test devices. The device was originally invented for the developing world, specifically for poor and remote regions of Africa and Asia, where healthcare is difficult to find.

But EyeNetra has also been pursuing opportunities to partner with VR companies who may wish to use the tech to produce “vision-corrected” VR displays. “As much as we want to solve the prescription glasses market, we could also [help] bring virtual reality to the masses,” says Ramesh Raskar, Co-founder. EyeNetra to MIT News.

“Right now, devices are built with extra space on the viewing end for people wearing glasses. But it could also help solve a larger issue: aligning the eye lens, prescription lens, and the virtual-reality screen,” said Raskar. “All three have to be aligned in the right way for you to enjoy the experience.”

The technology EyeNetra has created measures how a user’s optical refractive errors will affect how they see patterns on a digital display, similar to a VR HMD. These measurements could then be used to create pre-corrected images, “It’s personalized correction. Your vision correction is built into the headset,” Raskar explains.

VRFocus will continue to follow all the latest news and announcements on VR as details are released.

The post EyeNetra Wants to Combine its Eye Test Tech with VR appeared first on VRFocus.