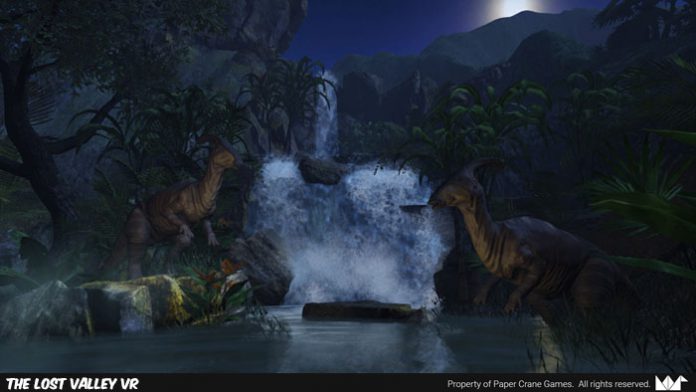 Those that own a second development kit (DK2) for the Oculus Rift virtual reality (VR) head-mounted display (HMD) may have sampled indie studio Paper Crane Games’ photography experience, The Lost Valley VR (pictured), over the past year. This free title – available on Oculus Share – serves as a foundation for an upcoming full videogame named Explorers Incorporated. But what can fans expect from the full title? A mix between popular titles like Pokémon Snap and Myst, with possible support for the HTC Vive and PlayStation VR kits on top of the Oculus Rift. Co-Founder Giancarlo Surla recently explained as much to VRFocus.

“It’s an adventure game,” Surla noted in an interview that will be published in full next week. “There’s going to be two main mechanics to it: we have the photography mechanic and also environmental exploration and puzzle solving mechanics. And, if we’re trying to find an analogue to existing games it would be Pokémon Snap mixed with Myst. So you’re going to be exploring this mysterious island, it shows up out of nowhere. There’s going to be different things you’re going to find on the island and the point is to uncover those mysteries using those two mechanics.”

As for support beyond the Oculus Rift, Surla was open about the team’s desire to bring Explorers Incorporated to as many HMDs as possible in the future. “We want to get this in front of as many eyes as possible. We’re going to be talking to Sony and HTC to see if we can get our game on their platforms for everybody to see,” the developer concluded. It’s not yet clear when Paper Crane Games might reveal Explorers Incorporated in full though the developer did note that it hoped to have a demo soon.

VRFocus will continue to follow Paper Crane Games’ work in VR closely, reporting back with the latest updates from the developer.