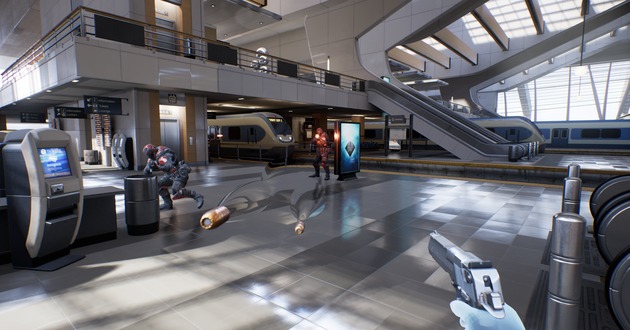 Late last year Epic Games confirmed that they would be both in attendance at VRLA’s Winter Expo and would be bringing their prototype virtual reality (VR) videogame Bullet Train for attendees to try. It has now been announced on the Unreal Engine blog that the popular experience, a staple of a Epic Games/Unreal Engine’s regular technical live streams, will also be in attendance at D.I.C.E. as part of the D.I.C.E. Arcade hub for attendees to try.

Bullet Train, which uses Oculus’s Oculus Touch motion-controllers in order to control the player character, places users in a train station only to have them engage in an intense fire fight against hostile forces. (See VRFocus’s hands-on preview to find out more.)

Commenting on the blog, Martin Rae, president of the Academy of Interactive Arts & Sciences said of Epic’s support “We are thrilled to host Epic Games’ Bullet Train at the D.I.C.E. Arcade and share this VR experience with our attendees. This year’s D.I.C.E. Summit conference is about the Art of Engagement, and there is no better technological example than this immersive experience, which allows for a level of direct, tactile engagement that is unparalleled.”

The VRLA Winter Expo which is taking place at the Los Angeles Convention Center begins tomorrow, January 23rd. Whilst Bullet Train will be playable without appointment at D.I.C.E in the Mandalay Bay Convention Center, Las Vegas from 9am-7pm on February 17th and 18th.

VRFocus will keep bring you more information about VR events at D.I.C.E and new from VRLA as we get it.