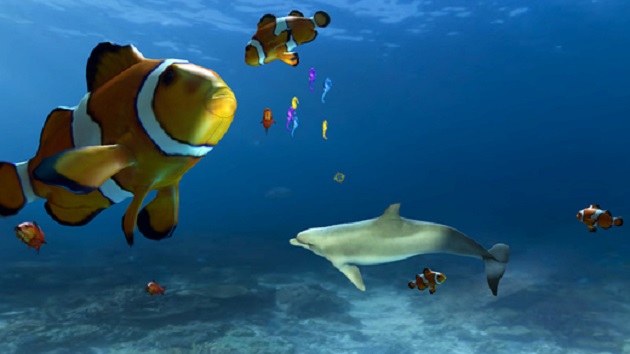 EON Reality a virtual reality (VR) and augmented reality (AR) software developer, headquartered in Irvine, California has announced a partnership with Whale and Dolphin Conservation (WDC). The collaboration is based on a joint mission to use (VR) and (AR) technology to raise awareness for ocean conservation. This has resulted in the creation of Aquarium VR for iOS and Android devices.

With the support of WDC experts, EON Reality has created realistic and life-like virtual representations of sea mammals so that anyone on the planet can learn and experience the plight of whales and dolphins, both in captivity and in the wild. As well as viewing and interacting with these beautiful creatures the app also features clown fish, turtles, sharks and sea horses to name a few.

“Virtual Reality of the kind being developed by EON provides amazing opportunities to reach people with information about how amazing whales and dolphins are and how the need our help,” said Chris Vick, Director of Marketing and Communications for WDC in a statement.

“Historically, the main way the public could experience dolphins and whales up close was through aquariums and water parks,” said Anna Lejerskar, Director of EON Reality’s Learn for Life Program. “Unfortunately, the captive mammals pay a very high price by being confined in order to give the public that experience. Thanks to augmented reality and virtual reality, anyone can see whales and dolphins in their natural environments (the wild), and are able to understand that these mammals have the right to exist as nature intends, not as humans decide.”

VRFocus will continue to bring you all the latest news on VR apps, reporting back with any new announcements.