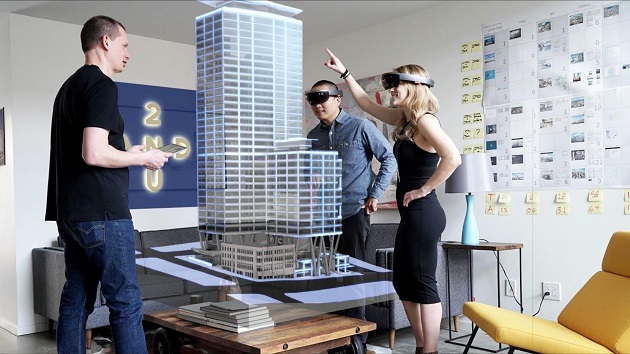 Augmented reality (AR) is shaping up to be a platform that has the potential to be incredibly useful and practical. We’ve seen recently how it’s being used in e-commerce to revolutionise the way we shop in a partnership between Visa and Blippar but it appears the technology is also attracting the attention of the construction industry, with global engineering firm Aecom recently announcing it plans to use Microsoft HoloLens headset in some of its projects.

Aecom called the move a pilot project that will see the HoloLens headset being used in some of the company’s engineering and construction projects on three continents. The engineering giant sees AR technology as a way to improve on its 3D modelling process by making it possible for workers and clients to actually explore the projects they’re working on and see details in greater depth, something the company hopes will “improve communication, collaboration and visualisation”

V3 reports that one of the first projects will be with the Serpentine Galleries’ annual architecture programme in London. This year the programme features four summer houses that have complex structures and according to Aecom president, Stephen Kadenacy, the HoloLens’ AR technology has been useful in aiding visualisation and design review.

“Exploring complex structures in a mixed reality environment has huge potential to accelerate the engineering design process,” he said.

“With this technology we can gain greater clarity earlier in the design review process than with 2D drawings or 3D models on screen, and team members in different locations, each wearing a headset, can simultaneously explore the same holographic projections. We’re very excited to be working with Trimble at the cutting edge of mixed reality.”

Using the HoloLens headset alongside software created by GPS product producer Trimble, Aecom designers and engineers are able to view complex structures from a distance like table-mounted 3D models, or they can zoom in for a 1:1 view that simulates what it would be like to move through the structural framework. The Trimble prsident Bryn Fosburgh said being able to do this makes it easier for teams to work together and communicate potential design issues.

Aecom’s HoloLens project will be taking place in London, Hong Kong and Denver, where the engineers and architects in these locations will be able to share holographic models with each other simultaneously, able to track one another’s movements on the AR model thanks to connective technology provided by Trimble.

VRFocus will continue to follow the project and report developments as they happen.