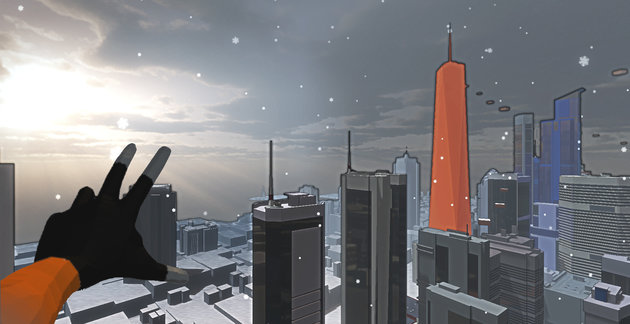 Last year VRFocus reported on the formation of a new virtual reality (VR) studio named Endeavor One. The studio consists of former members of Halo and Destiny developer, Bungie. At the same time, the team also announced its first videogame, JUMP, which later launched in Steam with support for the Oculus Rift head-mounted display (HMD). This week sees the title launch on two new platforms, however, in the Gear VR mobile-based HMD and the HTC Vive PC-based kit.

The PC version of JUMP has been updated to version 1.2, implementing support for HTC and Valve’s new VR device. It also brings in some new cities including San Francisco, Moscow, and Hong Kong, which can seemingly be played at Midnight, Daybreak, and Dawn. That adds to the five cities already included in Philadelphia, Detroit, Seattle, New York City and Tokyo. Each city has a Jump Tower that players must reach in as few turns as possible using – as you might have guessed – an enhanced jumping mechanic.

The PC edition of the title costs $9.99 USD while the mobile version is selling for $4.99. The latter edition is also one of a handful that requires a gamepad in order to be played.

Stay tuned to VRFocus for the latest VR releases.