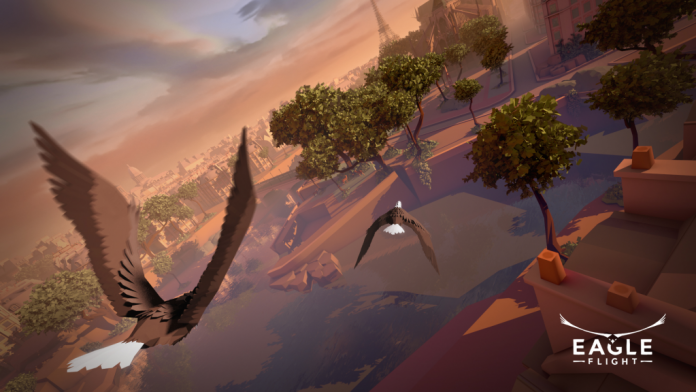 It has been announced today during Gamescom in Cologne, Germany, that FunHouse’s Eagle Flight will be coming out in October for the Oculus Rift head-mounted display (HMD), November for PlayStation VR, and December for the HTC Vive.

Ubisoft shared these release dates amongst others that will soon follow, and if you were expecting Eagle Flight to come out for the launch of the PlayStation VR then you might be a little disappointed – but not too much so. It has come out that its first release will be for the Oculus Rift on 18th October, PlayStation VR from 8th November, and the HTC Vive on 20th December.

Eagle Flight, developed FunHouse which is a division of Ubisoft Montreal, lets players take the form of the brd and fly the skies of Paris, overlooking most of the historic city and its landmarks while trying to win a competitive race. This title allows for both single and multiplayer modes, both in which they will take on a capture the prey race.

The only gameplay footage of this title is still what was shown at E3, which shows each player with their nametag above their bird, and a stream of either red or blue left behind depending on which team you’re on. The aim is to grab the dead rabbit and fly to the end without being caught out by other players.

It is said that Eagle Flight will also be available as a physical retail version as well as digital, but it won’t come out until a week after its release.

For more on the latest Ubisoft videogame releases, as well as all the news, updates, and features in the world of VR, make sure to check back with VRFocus.