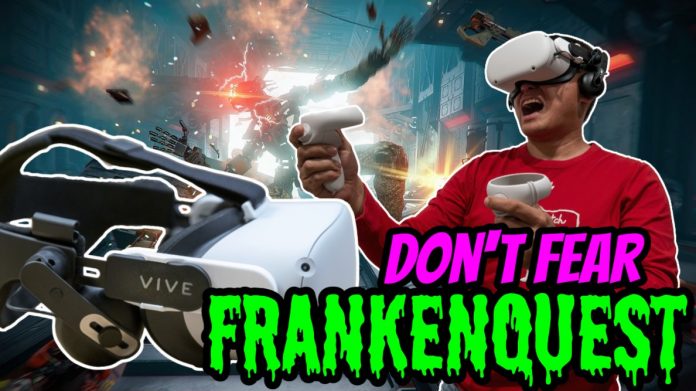 
If you have an Oculus Quest or Oculus Quest 2, you may have found it uncomfortable or even painful to use for prolonged periods.  Frankenquest is an easy way to make your VR headset comfortable.  But what is it and is it just for hardcore VR enthusiasts?  Is it better than the Oculus Elite Strap with Battery?  Is there a Frankenquest case?  Here’s a beginners’ guide to Frankenquest.

The Oculus Elite Strap is out of stock again.  Meanwhile, if you’ve been looking through Oculus Quest groups on social media, you’ve probably heard about Frankenquest.  What is it and why do you need it?  Here are the answers to your most common questions about Frankenquest.

How do you install Frankenquest?

What you need
Besides the Oculus Quest or Quest 2, you’ll need two accessories for Frankenquest:  First, you’ll need the HTC Vive Deluxe Audio Strap (DAS) which is currently around $99.  Second, you’ll need an adapter.  The adapters are 3D printed by many vendors and are available on Amazon or eBay for both Quest and Quest 2.

The DAS strap is a bit thicker than that of the Oculus Quest 2 so it can’t fit easily into the original buckle.  Instead, clip your new buckle to the old buckle.  You can now put the faceplate back in place.

Step 3: Remove the side straps.

Attach the Frankenquest adapters (one of them should be marked for the left and the other for the right).

Step 5: Clip the DAS straps to the adapters.

Plug the headphone cable to the Quest’s audio jack and that’s it!

Summary; Where to buy

Frankenquest does improve the Quest and Quest 2’s comfort tremendously.  It has a reasonable cost and is easy enough to install.  If you can’t find the Elite Strap with Battery, don’t hesitate to get the Frankenquest.

The Deluxe Audio Strap is available at Amazon.  The adapters for Quest or Quest 2 are available on Amazon and eBay.  In general, the adapters on eBay generally cost less, but the shipping can a take longer time than Amazon Prime.  Thank you very much for using these affiliate links to support 360 Rumors at no additional cost to you.  Meanwhile, I ‘ve also ordered an Elite Strap with Battery and will update this post to include a comparison when I get it mid-January.

The post DON’T FEAR FrankenQuest: what is it and do you need it for Oculus Quest? (Beginners’ FAQ) appeared first on 360 Rumors.