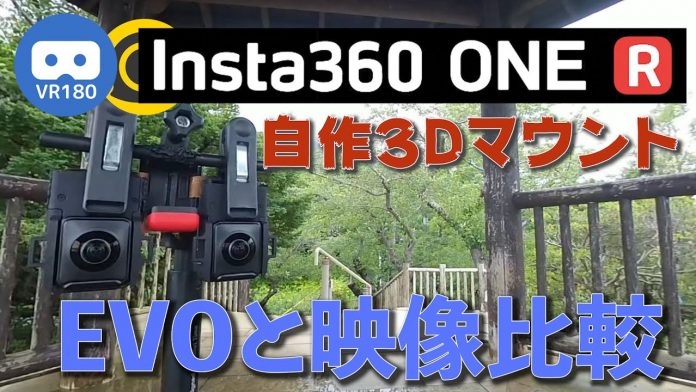 
Here’s a comparison between a DIY Insta360 One R 3D mod vs Insta360 EVO (the video has English subtitles).

The Insta360 One R 3D mod will enable the One R to capture VR180 photos and videos.  However, it is still unavailable, 10 months after the launch of the One R.  Meanwhile, a VR180 enthusiast named “VR evangelist” has decided to take matters into his own hands by creating his own Insta360 One R 3D Mod rig using parts from the Aerial 360 mod, which has the split lens 360 mod that will also be used for the 3D mod.

VR evangelist then compared the video quality from the DIY 3D Mod and the Insta360 EVO, and presented the comparison in VR180.  Here’s the video (please view with Google cardboard or other VR headset to see the 3D effect):

WILL INSTA360 PRODUCE THE 3D MOD?  Here’s my proposal

With such a long delay for the 3D Mod, One R owners are beginning to wonder if Insta360 will produce the 3D Mod.  One issue could be that VR180 is not yet a mass-market product.  In fact, Google, which created the VR180 format, has itself seemingly abandoned VR180.  If Insta360 creates the 3D Mod, they might be concerned about whether they will sell enough units to make it practical.

One possible solution for Insta360 is to create a crowdfunding campaign on Kickstarter or Indiegogo or some similar site for the 3D Mod.  They will be able to set the minimum quantity, which will be a good test of whether there is sufficient demand for it.  In addition, with backers providing the funding, they can reduce their risk.  Meanwhile, VR180 enthusiasts could receive a bit of a discount compared to the retail price for the 3D Mod.

Alternatively, they can restart production on Insta360 Evo and bring the software up to date.

If you want Insta360 to produce the 3D Mod, please let them know in the comments and please tweet the hashtag #3DMOD.  Thanks to Emanuele Ioria for bringing this video to my attention!