After Bill Gates sold Corbis Images to Visual China Group (VCG) back in January 2016, the citizen journalism photo agency Demotix (which Corbis bought in 2012) suddenly went dark. Now, after over a year has passed since the Corbis sale, some Demotix contributors have finally received an email from VCG… with few happy answers.

Back in late January 2016, after the Corbis sale was announced, the Demotix website began redirecting to the Corbis website. A few days later, Demotix Tweeted about the sale of its parent company and said that VCG would communicate with Demotix photographers “as soon as possible”: 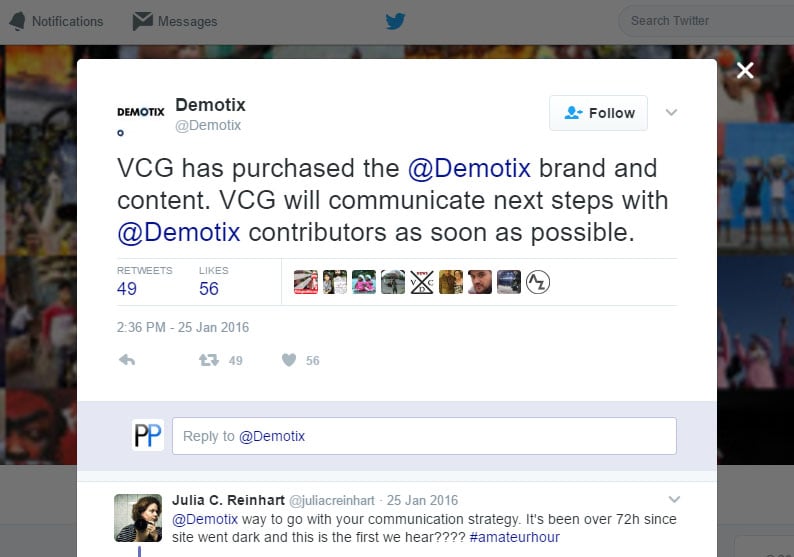 As the days, weeks, and months went by, many Demotix photographers became increasingly frustrated about the lack of communication regarding their owed payments and their photo archives.

@Demotix When will we get paid? Many people are owed money.

@Demotix @CorbisImages @GettyImagesNews Glad you keep selling my pics, may I ask how and when are you going to pay? https://t.co/yS4MQh02R8

@Demotix @GettyImages So you've sold my images, profited off my work and never paid or notified me? Not impressed. Pay the photographers.

@Demotix I still had money in my account with you. How can I retrieve the balance?

“With respect to the transition matter of Corbis/Demotix to VCG, in order to help you to understand clearly about your images on the Demotix website and royalties payment etc., we have summarized the attached Q&A to reply to your queries,” Visual China Group writes. Here’s the PDF that was attached:

Regarding photos in the Demotix archive, VCG says that it is “entitled to retain these images and not to delete them, and we also have no obligation to return your images.”

And here’s the answer for people who are asking about unpaid royalties:

As long as we distribute your images and receive any payment from the licensees, we will pay you the royalties in accordance with the Demotix Contract. If you haven’t received our payment notice, that means your images haven’t been licensed, and please do not inquire about it any more.

In addition, since the sale reports provided by the licensees include only images ID without names of contributors, we are endeavoring to find out whom the images belong to, and it will take some time. However, we will make the payment to you as soon as possible.

At least a few photographers, unhappy with these explanations sent over a year after the sale, took to Twitter to vent:

We have your images, you aren't being paid, we don't even know which are yours… stop asking! thanks @demotix @VisualChina pic.twitter.com/18oCCDoRdJ

@kwilesjrphoto @Visual_china @Demotix Definitely. Still waiting for many unpaid royalties. I've lost all hope now though if I'm being honest

This is an unfortunate end for the Demotix brand, which grew quickly after being founded in 2009 and at one time had partnered with some of the biggest publications around the Web and world.