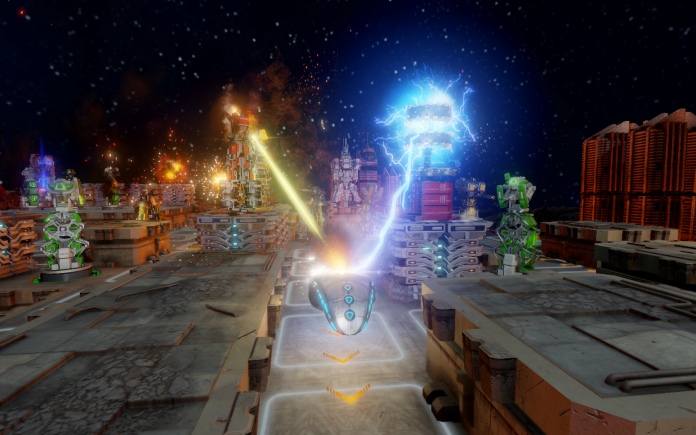 Today’s the day; Oculus Rift units are finally starting to arrive at the doors of Kickstarter backers and early pre-order customers. A total of 30 VR videogames are now available to download and play inside the head-mounted display (HMD). Among them in Defense Grid 2 Enhanced VR Edition. This is a port of Hidden Path Entertainment’s popular tower defence title, with new VR exclusive features and enhancements. VRFocus recently spoke to the developer to find out more about the project.

In the interview below, studio CEO Jeff Pobst discusses the work that’s gone into bringing Defense Grid 2 to VR. He also talks about the company’s relationship with Oculus VR and a potential future for the franchise with VR.

VRFocus: So, how is Defense Grid 2 enhanced with VR?

Jeff Pobst (JP): It is enhanced for VR because we took this game that we thought was our effort to make the very best tower defence game for PC and console and actually it was the folks at Oculus who approach us and said “Hey, we think your game would be really good for VR!” And we said “Our game? You don’t mean Counter-Strike?” And they said “No, no, we mean Defense Grid!” And we’re like “Why would Defense Grid be a good VR game?” And they said “Well, people love table top experiences in front of you. And they can bend down and they can look at it. It’s like a miniature world in front of them.” You mentioned like a train set.

And, in fact, it does. It really brings something out about this whole thing. So we went and we did a demo with them. And they loved the demo, we loved the demo, so we began a year-long project with Oculus with about half the team size that made the original game going through all the content, changing out a lot of the art assets, putting a lot more detail in because we let you get really close right into it. Revamping the entire UI so that you can just gaze and tap, gaze and tap. Our goal was to make the UI just completely go away and make it all about the strategy and the focus of what you wanted.

And then of course, the performance. We were a 30 frames per second game on PCs and console and know we need for smooth head movement and making it ultimately as comfortable as possible, we needed 90 frames per seconds on a higher resolution screen which is the Oculus Rift.

So that performance work, the art work, and then we also added a whole new chapter of content, basically an expansion with a new story. There’s new content there. That all lead to a year-long process with about half the size of the original team.

VRFocus: So is the new content exclusive to the Oculus Rift?

JP: It is, yes. And as you saw, it’s designed for VR. It’s vertically, it doesn’t have a lot of the constraints we normally have when we’re looking through a flat screen. It was 3D content before and we had constraints for how we made it up to this point where the camera angle was kind of a certain way and you could adjust it a little bit but we wanted to make sure you could see all the tower build squares.

Now as you can look anywhere, you can teleport down to the tower build squares and get in super close, you can pop around, you can see all parts of the level you couldn’t see before. We had a lot to do.

VRFocus: You’re changing some of the basic mechanics of the game too. Can you talk a bit more about that?

JP: One of the things we’ve found is that people love to explore in VR. And because they love to explore in VR we decided we really wanted to support that, enhance that, and also reward that. So in the past game, controlling and adjusting the level was something of a balance issue. We thought “Well if you’re going to spend some resources to make the level a little bit better than we should charge you for that”. But as we start looking at the VR edition we see people looking around into crevices, we start creating hidden objects for you to find.

We started creating interactive objects where you can look at them, find them, activate them, and we can give you achievements or rewards for them. And then we thought “You know what? Moving around the level and seeing it in a different way? It really didn’t change the balance of the game that much. Why don’t we also reward your explanation for finding these little control mechanisms and allow you to move the level around as well.

VRFocus: So if there could be a Defense Grid 3, that could be a VR videogame?

JP: At this point in time we aren’t thinking like that, but we have found that, for us and in our opinion and definitely of what we’ve been showing so far, that the game has really come into its own in VR. We love the game, we’re very proud of the game as what people are calling a ‘flatscreen game’ now. It’s still 3D but it’s flatscreen. But I think in VR the game takes on a whole new life.

One of my favourite things is we’ve brought in some of our core players, people that have played hundreds of hours and live in the area near where our studio is in Seattle, and we put them in, set them down and ask “Okay, what do you think of this?” And they’ve said “It’s like an entirely new game!” And of course it’s not an entirely new game; the mechanics and – except for the new content of course – but many of the levels are based on the original levels.

And they’ve been tweaked, and we’ve changed some of the ways they work and we’ve adjusted things because, in VR, we have peripheral vision both vertically and horizontally and we have a better sense of what’s going on around you in a level. In the past we had to be careful about how many things were going on in the level at one time because you slide the window over, things may happen off-screen that may be really important. We can’t have too many of those things going or it could make you feel like you’ve got out of whack.

But in VR you actually can sense what’s going on. You can say “Okay, they’re coming, they’ll be there in a minute.” And as you’re looking around you just have a sense of place and understanding of how things are progressing in time that you did not have before. And so we adjust the difficulty based on that, and we changed some of the way the waves work based on that. We’ve really changed a lot of the things about the game to make sure that it matches up to the medium that it’s being presented in which is virtual reality. And we think that it actually provides a superior experience.

VRFocus: So could there be any kind of a release for other headsets?

JP: This was a game that Oculus came to us and said “Hey, we think this would be really good.” We demoed with them and then they actually picked it up as an Oculus Studios title. They’ve paid for the development of this so we have an exclusivity with them.