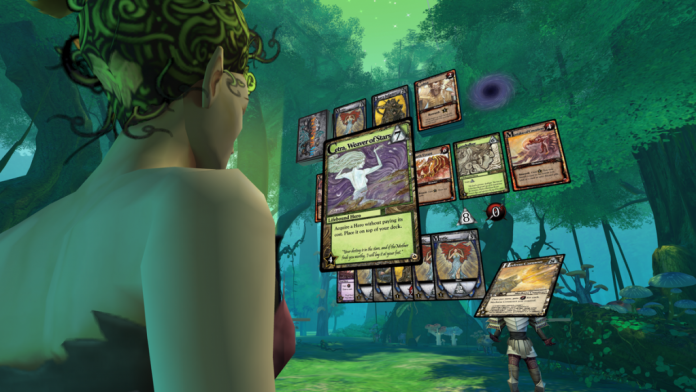 Based on the popular tabletop game Ascension by Stone Blade Entertainment,  Temple Gates Games has brought the experience into VR, enabling fans to play as their favourite heroes in real time, online with other players around the world.

“It’s incredibly exciting to see Ascension come to life in virtual reality, where sitting in the same living room is no longer a requirement and players from all over the world can play a game of Ascension together,” said Justin Gary, Founder and CEO, Stone Blade Entertainment.

“Half the fun of board games is tabletalk, which is why it was so fun to bring our team’s favourite deckbuilding game, Ascension to VR. In Ascension VR, you can be right there with your friends, chatting about strategies and goofing off as you play, no matter how far apart you live,” said Theresa Duringer, CEO, Temple Gates Games.

For those unfamiliar with the original game Temple Gates Games has included a full single-player tutorial, as well as single-player AI modes for new players to acclimatise to the gameplay mechanics before heading online. Players will be able to battle with up to three AI opponents to build familiarity with the cards, or they can dive right into multiplayer.

Ascension VR will launch on Steam and the Oculus Store next Monday 1st August 2016, for $9.99 USD. And it doesn’t matter which platform players or their friends have, as Ascension VR features cross platform support.

For all the latest news from Temple Gates Games, keep reading VRFocus.