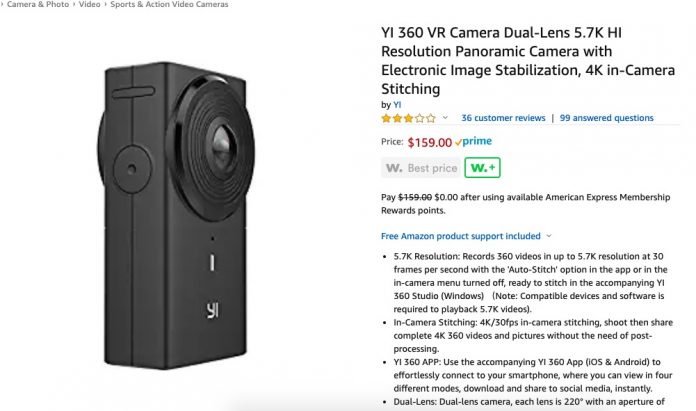 Why then is it heavily discounted (it originally launched at $399)?  There has to be a catch, right?

It appears that Yi Technology has lost interest in 360 and VR.  They had the Yi 360 VR, the professional Yi Halo, and they announced the Yi Horizon VR180 camera.  However, they stopped selling the Yi Halo, and it seems the Yi Horizon is in limbo and will probably no longer be produced.

As for the Yi 360 VR, it appears that they are no longer updating it.  In fact, you can still find the Yi 360 VR on their webpage, but if you try to download the software, you won’t be able to.  Fortunately, I have a mirrored file in my main Yi 360 VR review page.  There are other issues with the Yi 360 VR: the videos take an extremely long time to stitch (even if you have a graphics card), and the stitching software is only for Windows (there’s no Mac stitcher).

If the Yi 360 VR looks like a deadend, why should you care about it?  Because it still has very good video quality.  Besides great detail, it also has surprisingly smooth stitching.  And at this price, it costs less than half of the Insta360 One X.

The Yi 360 VR also has realtime stitching at 4K 30fps, which is a great option if you don’t want to stitch the videos, or if you have a Mac and can’t use the stitcher.  It is the lowest cost 360 camera with 4K realtime stitching.

You can get the Yi 360 VR here at this discounted price, while supplies last.