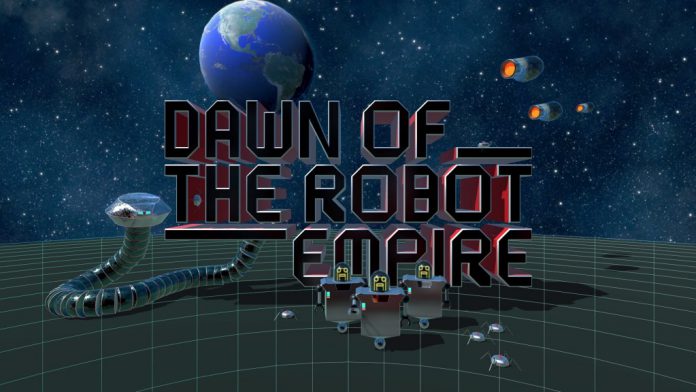 First-person shooters (FPS) are set to thrive on the HTC Vive virtual reality (VR) head-mounted display (HMD) thanks to its accurate position-tracked controllers. The kit only launched earlier this month but there’s already another entry into this popular genre to test out. Indie developer oeFUN has launched an Early Access version of a new Room Scale VR FPS named Dawn of the Robot Empire over on Steam, which looks to be similar to other experiences such as The Brookhaven Experiment and Jeeboman.

Dawn of the Robot Empire pits players against waves of approaching robots, allowing them to fight back with a laser pistol, staff and shield. “Dawn of the Robot Empire is my 1st VR game,” the developer explains. “I’ve really tried to make the interactions feel as physical as possible to make it seem like you’re in the world and can interact with it. e.g. the laser pistol not only shoots; you can use it to “bash” enemies. An example of this is seen in the game trailer where you can ‘spear’ a robotic snake with your staff weapon and then bash it’s armored eye till it breaks. It’s something that you’ve probably seen in a fantasy movie or performed in another game by pushing an “action” button. But here you’re really doing it. The haptic feedback makes all those hits really connect.”

The full launch for the title is expected in around two to three months from now. VRFocus will bring you more information about the game as it revealed.