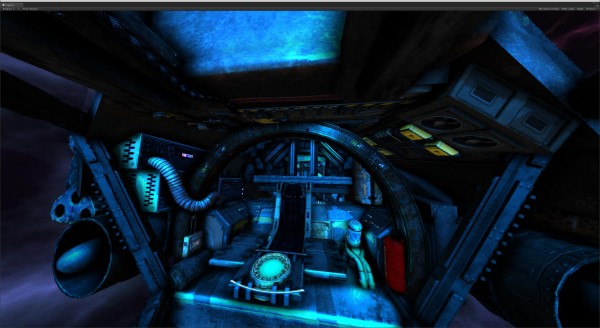 Virtual reality (VR) co-op space shooter, DarkfieldVR, has been anticipated to release its final consumer version but it has taken the developers a little more time than expected for it to materialise. They don’t want to disappoint so now has a new version for backers available within the next month including in-game additions and tweaks as well as support for the HTC Vive as well as the Oculus Rift.

Featured in this new alpha release, which is in place of the final version that is anticipated to be released next, is: new cockpits to reduce motion sickness – even when doing barrel rolls – as well as new ships, including a four seater ship for co-op missions; a completely replaced network solution so now every player can host a server, even without internet connection; there is now a floating origin which means no matter where you move on the map gameplay will be smooth; additional support for hand tracked controllers, including the Oculus Touch, as additional input for gunners; and there will also be Steam keys added to downloads, meaning you will have two copies when purchasing the title for both the Vive and Rift.

There is also the addition of head holograms for users to submit their heads which will be displayed if you target a ship that belongs to another backer. It is emphasised that the recordings must be of good taste or else they will not be submitted.

In addition to the final version of DarkfieldVR, the developers will also include ‘Holodeck Minigames’ which will include snippets of two new games in development – Nighttime Terror: Dessert Defender, an expansion of the original game, and GravLab, a physics puzzle videogame.

The new alpha version of DarkfieldVR will be available at the end of March – beginning of April.

For the latest updates and news in VR check back with VRFocus.