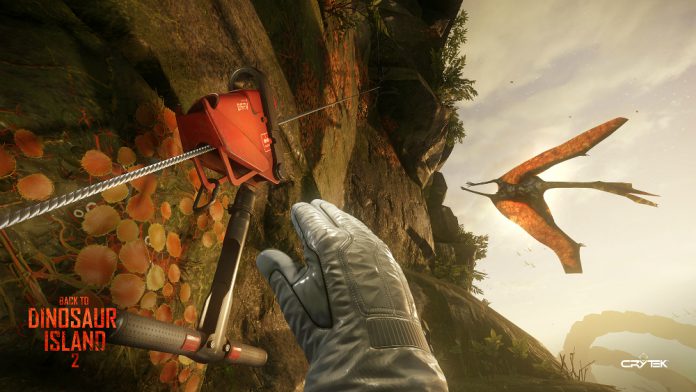 Crytek has been involved with virtual reality (VR) for some time now, developing Robinson: The Journey and The Climb amongst others. Its exhibited two tech demos in the Back to Dinosaur Island series, with the first being released for free back in November on Steam. Now the studio has released the second episode for Oculus Rift DK2 owners to try.

Back to Dinosaur Island Episode 2 originally debuted at the Electronic Entertainment Expo (E3) 2015, and up till now was only available to play at industry events. In this next instalment players will be able to scale a deadly cliff face as they try to avoid raining debris. At the same time huge flying dinosaurs will soar overhead reacting to the players presence.

Back to Dinosaur Island actually forms the foundations for Robinson: The Journey, which casts players as a young boy named Robin that crash lands on a mysterious alien planet filled with dinosaurs. While the demo is only available for Oculus Rift DK2, Robinson: The Journey has only been confirmed for Sony Computer Entertainment’s (SCE) PlayStation VR head-mounted display (HMD) at the moment.

VRFocus will continue its coverage of Crytek’s VR projects, reporting back with any new announcements.

The post Crytek’s Back to Dinosaur Island Episode 2 Now Available on Steam appeared first on VRFocus.