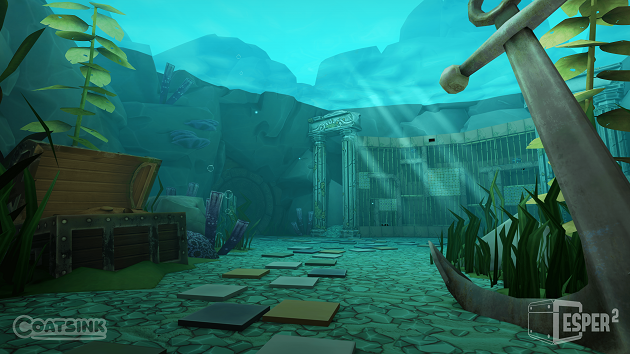 Leading up to the launch of the Oculus Rift virtual reality (VR) head-mounted display (HMD) last month it was assumed that UK-based indie studio Coatsink would be releasing the first entry in its Esper series on the device on arrival. That wasn’t quite what happened, however, as it was actually Esper 2 that launched alongside the Oculus Rift. The original title is still planned for the device, though, and Coatsink has a surprise in store for anyone that picks up the sequel before its release.

Coatsink CEO Tom Beardsmore has told VRFocus that anyone that owns Esper 2 by the time the first launches will get the title for free. Following that, a bundle for both titles will be made available, though it’s not clear if they’ll both be available individually. Both videogames first hit the Gear VR mobile-based HMD last year before their Oculus Rift ports were confirmed. Expect the PC-based versions to be bolstered with upgraded visuals and making use of the Xbox One gamepad rather than the Gear VR’s on-board touchpad. A release date for the original Esper is still yet to be provided.

Outside of Esper, Coatsink is also working with Boneloaf to bring its ever-popular multiplayer brawler, Gang Beasts, to the Oculus Rift and PlayStation VR. The team also has other projects in the works.

Check back with VRFocus for the latest from Coatsink.