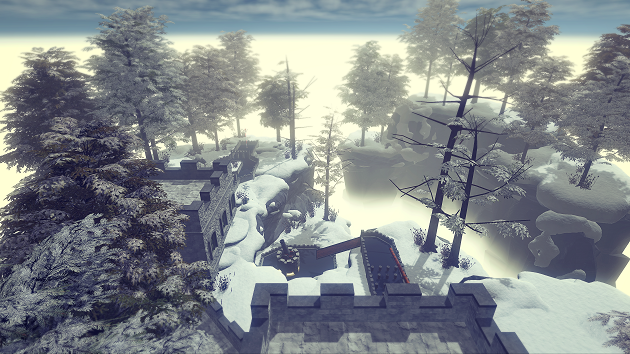 One of the key ingredients for the launch of any new videogame platform is content. Not only the amount of it but also the quality of it. It’s something Valve is addressing with today’s Steam VR Developer Showcase with 12 different experiences on show. The developer announced all the experiences would be available this year, several of which are now confirmed to be launch titles. The latest of which is Cloudlands: VR Minigolf from developer Futuretown.

Cloudlands: VR Minigolf pits players on an 18-hole golf course that will gradually test their skills as they strive for the top of the leaderboards. One of the studios’ first projects to be built for the HTC Vive’s room-scale motion-tracking system ‘Lighthouse’, the videogame will feature both local and online multiplayer at launch.

Being a mini golf game each of Cloudlands holes will offer a varied range of obstacles to utilise and manoeuvre round, with players making use of ball cannons, floating bridges, and an other objects to get their best score.

With the HTC Vive due to begin shipping in April, virtual reality (VR) fans will also have Northway Games’ Fantastic Contraption, Cloudhead Games’ The Gallery: Call of the Starseed and Phaser Lock Interactive’s Final Approach as other available launch titles.

VRFocus will continue to follow the progress of Cloudlands: VR Minigolf and any further announcements from Steam VR Developer Showcase.