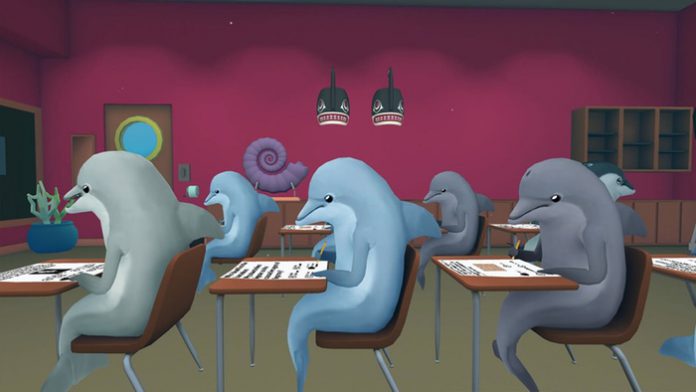 Those that have been following VRFocus since it started up nearly two years ago may well remember Classroom Aquatic, a wholly unique virtual reality (VR) ‘cheat ’em up’ from indie developer Sunken Places. 2015 has been a quiet year for news on the upcoming title, though back in January its creators did hint that a possible PlayStation 4 version with support for the PlayStation VR head-mounted display (HMD) could be in the works alongside the PC version that supports the Oculus Rift. Today, Sunken Places has officially confirmed that Classroom Aquatic is coming to PlayStation VR.

The news was confirmed over on the PlayStation Blog. There, the developer’s Remy Karns explained that Classroom Aquatic casts players as a foreign exchange diver student in a school of dolphins. It’s here that they will sit tests they players won’t know the answers to, and instead must cheat in order to pass them. This will include using PlayStation VR’s head-tracking technology to look at neighbouring student’s test papers while trying not get caught by the teacher. Different teachers will also have different methods to try and prevent cheating.

“Classroom Aquatic has been designed to be a true VR game: rather than a port of a single screen game or a translation of an existing genre, its mechanics, goals, and gameplay have all been tailored to be played on VR head-mounted displays,” Karns explained. “We think Playstation VR will be the ideal platform for us, as it’s a VR device specifically made for games.” Obviously the post makes no mention of if the Oculus Rift version is still in development, though the crowd-funded nature of the title suggests that it’s still on. Sunken Places raised some $31,315 through Kickstarter back in 2014.

The news arrives ahead of this weekend’s PlayStation Experience, where it’s thought that yet more PlayStation VR titles will be announced. VRFocus will be at the event to bring you the latest updates on any compatible videogames.