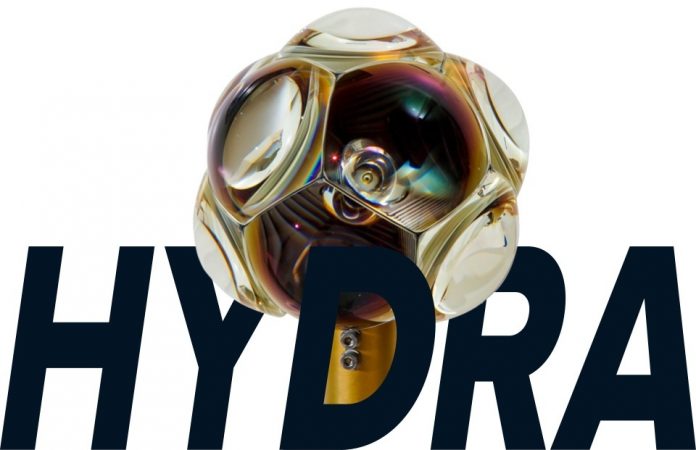 
Circle Optics Hydra is a professional 360 camera that will have 12K resolution, 12-bit video, and will require no stitching.

Conventional professional 360 cameras use several fisheye lenses and multiple sensors to capture several videos that are stitched into a single 360 video.  For high resolution cameras, stitching can be very time consuming and can be susceptible to stitching errors due to parallax.

Circle Optics is a professional 360 camera that uses a completely different design to capture high resolution 360 video with no stitching required.  Here is a product video:

Here are some more photos of the Hydra:

The Hydra appears to be slightly smaller than the Insta360 Pro 2.

Circle Optics claims that the Hydra captures a single image and thus requires no stitching, but they did not say that it is a standard equirectangular 360 video.

They haven’t disclosed their method, but from the photos, I speculate that it uses the eleven lenses arranged in a dodecahedron pattern.  Circle Optics does not say how many sensors it has, but they call the eleven lenses “channels” instead of lenses.  I believe this means they use the lenses to project the images onto a single sensor with a single lens.  I speculate that the resulting video will have eleven small images in them.  Because the images are focused onto a single point, Circle Optics claims that there is zero parallax.  It then appears to use a fixed algorithm to convert the eleven images into a single equirectangular image.

Unlike optical flow stitching used by many professional 360 cameras, the conversion requires far less computational power.  Indeed, Circle Optics claims that it is possible to get a 12K live view, or to live stream in 12K.

Price and availability have not yet been announced, but given the specs, the presumably large and high resolution sensor, and the custom optics, I speculate that it could be quite expensive.  I’ll update this post as I find out more info.  Here is the official website.

The post Circle Optics Hydra is a 12K 360 camera with no stitching needed appeared first on 360 Rumors.