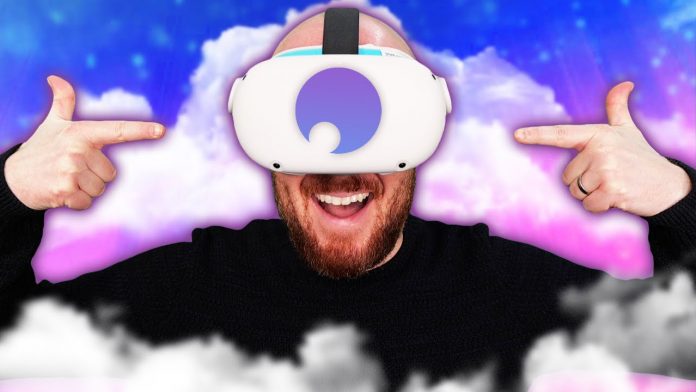 
How would you like to use a reasonably powerful VR-ready PC to play PC VR games wirelessly on Oculus Quest, or to edit 8K 360 videos?  Or perhaps you want to able to stitch DSLR 360 photos from your phone?  You can do all that with Shadow, a cloud computing service that costs that starts at only $12 per month.  Here’s how to use it.

Shadow is a cloud computing service that lets you use a VR-ready PC any way that you want, whether for gaming or video editing, or any other purpose.  The lowest tier of their service gives you access to a quad-core Windows 10 PC with 12GB RAM, 256GB SSD,  1 Gbps internet speed, and a graphics card equivalent to a GTX 1080, which has more than enough power for PC VR or 360 video editing.  A used PC like that would cost around $1000 on eBay.  If you put that on a credit card, it could cost around $28 per month for 2 years to pay off.  Alternatively, you can use a PC like that with Shadow for $11.99 per month with no contract, and you won’t ever have to upgrade it yourself.

BASICS: HOW TO USE YOUR SHADOW PC

From there you can install your preferred apps just like with a regular PC.  What if  you want to use USB peripherals for your Shadow PC?  Some peripherals such as a PS4 or Xbox controllers will be automatically detected by the Shadow app as soon as you connect them to your home PC.  They’ll appear in the Shadow app within the Controllers tab.

HOW TO STITCH DSLR 360 PHOTOS WITH YOUR PHONE OR TABLET

There is currently no 360 photo stitching software for phones or tablets.  However, you can stitch 360 photos shot with your DSLR from your phone using Shadow.

HOW TO USE SHADOW PC FOR 360 VIDEO EDITING:

If you want to know how to use Premiere for 360 video editing see this tutorial (it was made for One X but also works for other 360 cameras, except for the “no stitch” plugin which is exclusive to Insta360 cameras):

HOW TO USE SHADOW PC FOR VR:

You can use a Shadow PC for PC VR as well with an Oculus Quest or Quest 2.  You’ll need:
1. an Oculus Quest
2. a 5ghz wireless router
3. a PC with an ethernet connection to your router to minimize lag.

You’ll use the same process as for a wireless PC VR setup with Oculus Quest 2.  See the tutorial here.  Here’s a demo by Mike from Virtual Reality Oasis: