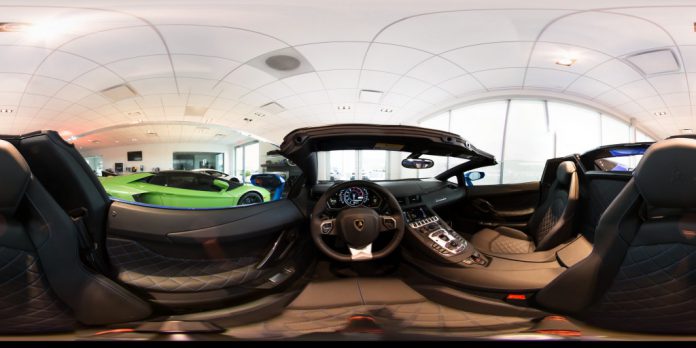 Let’s face it, nobody wants to look out the window to see the Google car gaining speed to jump the curb and go barreling into your favorite bookstore, church, or donut shop. Although the Google car would look cool as hell with sprinkles on top, I’m sure the shop owner would rather them on the donuts.

The best way that I can show what I do is to pull out a few Google Cardboards from my bag and pass them around. Every time I do that, someone will invariably say, “Wow!” Seeing someone get excited about this stuff right away is infectious, it’s awesome, it’s powerful, and it’s just plain fun.

For me, getting that “wow!” has sort of become a mission.

Some Google Certified Photographers, will go door-to-door, soliciting. I suck at sales, so I don’t go door-to-door. When I do go blindly into a business, I go in chase of that experience. I go to show people things they wouldn’t normally see. For instance, I would show them what it looks like to sit in a Lamborghini Aventador, in an empty showroom, with nobody to tell them, “Don’t press that!” It’s just them, the car, and the magic of ‘being there.’

Even if I leave a meeting without a deal, I still leave beaming, every time, because I just made someone’s day. I made someone aware that they could visit any place they wished, as long as the Google car or a guy like me had done Street View shots of it. I made their day by making them say, “Wow!”

On Twitter I recently asked some of my followers what they would call the single most important device that started us on this incredible wave of VR goodness. The answer wasn’t unexpected but still surprised me because of the clout of the people that answered. Despite the Samsung Gear VR being out for six months and despite the Oculus Rift being in development (as a Kickstarter campaign) since 2012, the answer was unanimous; everyone that answered pegged Google Cardboard and that’s what I was using.

Now, I don’t personally have an HTC Vive, Oculus Rift, or Samsung Gear VR. What I do have is a tremendous group of people here in Salt Lake City that get the same kick out of showing this stuff off as I do. I’ve been hanging around these people, in any way possible at every chance I get. I use, or watch them use, their equipment at events we (UtahVR) hold. I get to help people who have never put one of these devices up against their face and watch them disappear into another reality.

As for the Google thing, I was approached and certified to do this job just after the Street View | Trusted program started (under another name at the time). Shortly after, a few books came out that related directly to Virtual Reality (Ready Player One being among them). At the time, VR was still two screens strapped to ski-goggles. Unfortunately, I let those books sit. I had to be completely up on this Street View stuff. I was already more knowledgeable of Google Maps than most and I needed to increase that knowledge, but my entire collection of books sat and collected dust (real and virtual).

I think about the practice of approaching business owners and handing them Google Cardboard and I have mixed feelings. VR-wise, I am showing the absolute smallest player on the market. I am showing my clients, their customers, or their families, the very bottom of the barrel. In a way, I feel I’m doing a bit of injustice for all of these people but then I remember that Google Cardboard really is the only thing I can take to a meeting, then give to a client (or employee or customer) without batting an eye.

Google Cardboard has become a sort-of business card for me. An expensive business card but it has a far greater impact on people than a piece of thick paper with interesting graphics and words. Cardboard can’t be left on a desk to be forgotten or thrown away because people immediately have memories attached to them. They remember their own “wow!” they got from that little piece of cardboard stays, it gets used again.

I revisit many of my clients. I have some who proudly display their Cardboards prominently in their offices. One of those clients is an older Gentleman who displays his Cardboard like a trophy. Unlike a trophy though, it’s nearly worn-out. The Velcro at the top is nearly unusable because of how many times he’s put his phone into it. He’s thanked me, many times, for showing him what is possible with that little thing. He has expressed to me the fact that he “goes into” the Cardboard searching for the next thing that will surprise him. All I do is simply sit across his desk and guide him to the next thing that will spark that awe and that wonder that I love seeing in him. His words are a bit different but always the same, “Ah, MAN!”

So sure, my day job as a Google Certified Photographer is really cool. I get to go places people don’t normally get to go. Best of all, they get to keep the Google car at bay as it drives back and forth outside donut shops like an anxious bull waiting to charge.

BUT, I’ve found something incredible here in Salt Lake City. I’ve found a group of people that have been in the search for the same thing I’ve been searching for, I’ve found peers I didn’t even know existed. I thought I was alone in my quest to find the “wow!” without realizing that right here, alongside me the whole time, were people that have been doing the same thing. They’ve just been doing it with different devices. Where I’ve been using Cardboard, they’ve taken to the streets with Samsung Gear VRs in hand. These people have found the same response I’ve found. They found, “wow!” in ways I should have been aware of years ago, if I’d just read a few of those dusty books.

There is one thing I feel very lucky about; I found this group of people before the HTC Vive and Oculus Rift hit the commercial market. I found this group of people when things like a construction helmet with a Project Tango Tablet strapped to the back of it wasn’t crazy (it still isn’t, it sent shivers down my spine when I first did it) but there are still those that mock us, The Unbelievers, the ones that haven’t experienced true VR and feel that it’s just going to come and go again. It’s those people that are the most fun to watch in their first VR experience. They’re easy to spot because they don’t like to make eye-contact with us nerdy-types while in the midst of mocking.

This group that I can now proudly say I’m a part of, held an event shortly after the consumer-launch of the HTC Vive and Oculus Rift. The event quickly surpassed the organizer’s expectations. The demand grew so large it forced us into the largest space we’d needed for any previous event we’d held up to that point. We outgrew a very large space at the University of Utah.

For that one night, we all scrambled getting hundreds of people into our 20 or so Vive’s. I can say, with a fair amount of certainty, that the chasing the “wow!” that night wasn’t just one-way. We weren’t there to make an assembly-line and be bored. We were all there to experience the one thing that we all chase now. And we chase it like it’s our prey.

Once the headset is on the person’s face and strapped in, one of us will launch the experience.

Then we wait, watching intently, until that one word inevitably slips from their mouth:

Best of all, I’ve noticed that the number of people watching for that expression has gone from those first few of us, to a crowd. We all know the “wow!” is coming.