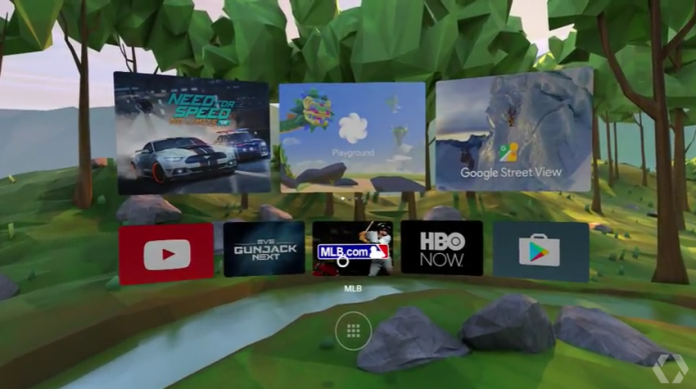 There has been a flood of virtual reality (VR) announcements and updates from Google I/O 2016, more notably of the newest mobile-based head-mounted display (HMD) from the Google, Daydream, including the addition of its motion controller that will be bundled with it. Something that may have been less noticed was the individual titles that were previewed for the newly announced HMD, and during the opening keynote there was a teaser for the next title to follow CCP Games’ Gunjack, EVE: Gunjack Next.

During CCP Games’ EVE Fanfest VRTV spoke to the team who worked on Gunjack was present with its Samsung Gear VR and Oculus Rift versions of the title, which is also developed for HTC Vive and PlayStation VR, who hinted there would be developments of the videogame, and the hints have proved true now that during Clay Bavor’s segment during the introductory keynote, who is the Vice President of Virtual Reality at Google, there was a selection of titles on display as an example of the home screen of the HMD. What was revealed was very minimal but it can only be assumed that it is a sequel to the original title from the studio who also developed EVE: Valkyrie.

Daydream already has a selection of partners and developers creating titles and content for the HMD, which is the second mobile-based HMD to come from Google. This new piece of VR hardware is a large step up from the Google Cardboard as it is firstly made of plastic rather than cardboard, and features an inclusive controller which implies its sustainability as an HMD. Google will continue to announce more partners and developers to join the teased list that has already featured today.

For the all the latest from Google I/O 2016 as well as news and updates in the world of VR, stay with VRFocus.