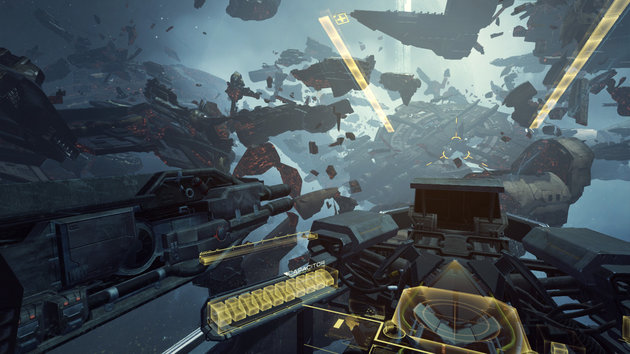 Its been known for some time that EVE: Online developer CCP Games would be speaking at next months VRTGO conference in Newcastle, UK. What wasn’t confirmed by the studio until recently, was whether its virtual reality (VR) title EVE: Valkyrie would be on demonstration at the event. VRTGO confirmed the fact via its Twitter account earlier today.

For the conference CCP Games will be inviting attendees to join the Valkyrie and fight alongside the legendary Rán Kavik in a ‘Convoy’ single player mission on Oculus Rift head-mounted display (HMD). Players are tasked with protecting the fleet and removing the threat from incoming fighters as they take control in a playable version of the 2015 trailer. EVE: Valkyrie  has been built from the ground up for VR and the title will also support the PlayStation VR HMD on PlayStation 4. The title will be available for the headsets when they launch in 2016.

EVE: Valkyrie isn’t the only VR videogame CCP is working on. Gunjack is in development for Samsung Gear VR HMD. Set in the EVE: Online science-fiction universe, players take on the role of a gun turret operator on a mining vessel, protecting the ship from pirates, opportunists and anything else.

VRTGO will be held on 12th November 2015, at the Baltic Centre for Contemporary Art, Newcastle. Tickets are still currently available, priced at £199 GBP excluding fees and VRFocus will keep you updated with all the latest speaker sessions announced for the event.