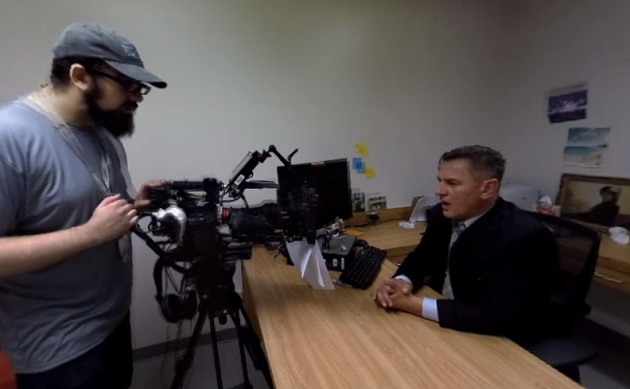 The annual South by South West (SXSW) film festival will be taking place this March and part of it includes a virtual reality (VR) and augmented reality (AR) expo running from 16th – 18th. Premiering at the expo will be Career Opportunities in Organized Crime, a feature-length film shot entirely with 360-degree VR cameras.

Created by first-time filmmaker Alex Oshmyansky and Akibimi Productions, LLC, Career Opportunities in Organized Crime is a “mocku-mentary” style film, following the filming of a recruitment video for the Russian mafia.

“The film is a an experiment to see what kind of experience a feature-length virtual reality film would be,” said Oshmyansky in a statement. “I’m obviously biased, but I think it turned out great. The film is a whole new kind of cinematic experience that hasn’t existed before. We are thrilled to be able to present it at the South by Southwest VR/AR Experience Expo.”

After the premier the film is set to be released to the general public in spring as a downloadable app for smartphones, Samsung Gear VR, and the Oculus Rift head-mounted display (HMD).

Those attending SXSW can book a viewing through www.mafiacareers.com, where you’ll find further information and behind-the-scenes footage of Career Opportunities in Organized Crime.

VRFocus will continue to report on the latest VR and AR announcements for SXSW as more projects are revealed.

The post Career Opportunities in Organized Crime to Premier at SXSW appeared first on VRFocus.