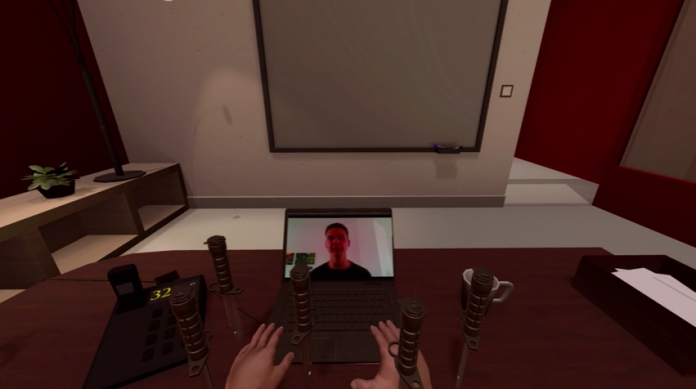 Back in 2013 indie developer Yorick van Vliet who runs Skydome Studios, became a finalist at the IndieCade VRJam with his virtual reality (VR) title Don’t Let Go!. Supporting the original Oculus Rift development kit (DK1) Don’t Let Go!  challenged players to hold onto their keyboards as various nasty occurrences happened around them. Now Van Vliet has released a teaser trailer for a re-launch of Don’t Let Go, with additional content.

Launching exclusively on the WEARVR platform on 23rd May, 2016, Don’t Let Go! will still include the original content, velociraptors, knifes and more, that all take place in an office environment. But now there’s a new Desert area with scorpions, snakes and other nasties to frighten the life out of you, and make you let go of the keyboard.

And holding the keyboard is the only action you need to do. Not literally just holding onto it, rather pressing down on both Ctrl keys at the same time. Let go for either of them and its game over.

Alongside the new content the developer is also adding additional support. Don’t Let Go! will now work on the latest Oculus Rift CV1 as well as the HTC Vive head-mounted display (HMD).

Since creating Don’t Let Go! Skydome Studios has also released another VR title, Audio Arena for Samsung Gear VR. This was entered into an Oculus Mobile VR Jam last year which it won.

Head on over to WEARVR next week to see how easily scared you get, and VRFocus will bring you any further news on Don’t Let Go! as announcements are made.